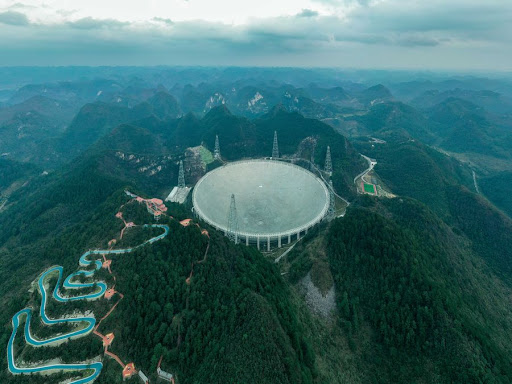 Li Di never doubts China’s FAST will provide faster access to epoch-making discoveries for human beings.
“Unexpected discoveries will be made with the help of some equipment that has achieved a leap in observation capability,” said the chief scientist of the Five-hundred-meter Aperture Spherical Radio Telescope (FAST).
Starting formal operations on Jan. 11, 2020, FAST, located in a deep and round karst depression in southwest China’s Guizhou Province, is believed to be the world’s most sensitive radio telescope.
The largest single-dish radio telescope in the world has a huge potential for verifying and exploring mysteries of the universe in fields including gravity theory, galaxy evolution, the origin of stars and planets and even the origin of matter and life, according to Li.
With the assistance of the FAST, scientists have made a series of breakthroughs. They have discovered a new fast radio burst (FRB), which are mysterious signals believed to be from the distant universe, while detecting the neutral hydrogen line emission from extragalactic galaxies for the first time, which could help enrich the understanding of dark matter.
Li said astronomy is an open discipline, and experts worldwide have participated in most of the early scientific achievements of the FAST, which will be available for global service from April 1.
The National Astronomical Observatories of China (NAOC) under the Chinese Academy of Sciences, the operator of the telescope, confirmed that scientists across the world can make online appointments to use the device for observation from April 1. An allotted timetable will be available by Aug. 1.
It is the motive force and ultimate goal of building the FAST to explore the origin of the universe and reveal its mysteries. Foreign scientists are welcomed to lead research projects independently or as the leaders using the FAST for observation.
Both Chinese and foreign scientists comply with the same online application formality for observation. And their research projects are not evaluated by Chinese scientists, but by the top international experts in their respective fields such as interstellar molecules and pulsars.
“No matter who is leading the project, everyone is moving toward the same scientific goal,” said Li Kejia, a researcher at the NAOC.