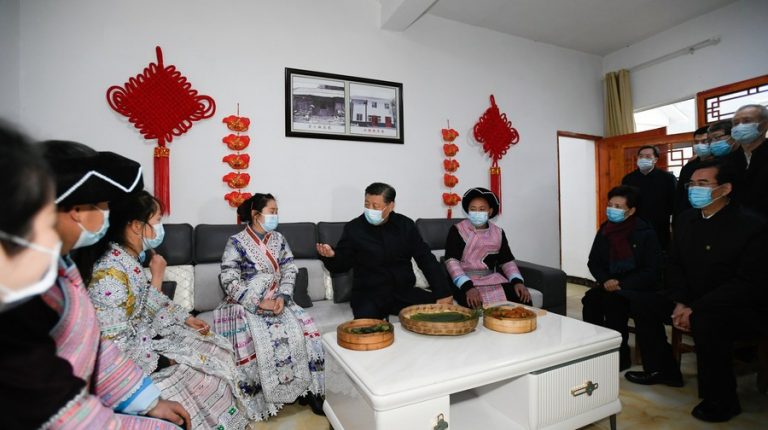 Xi Jinping, general secretary of the Communist Party of China Central Committee, started visiting southwest China’s Guizhou Province on Wednesday, about one week before the Spring Festival, or the Chinese Lunar New Year.

For nine years in a row, Xi has made it a tradition to visit ordinary people, especially the disadvantaged groups, ahead of the Spring Festival, the most important holiday on the Chinese calendar.

The following are some of the most memorable moments of Xi’s interactions with these people during his pre-Spring Festival tours.

Xi went to the home of farmer Li Fashun in Simola Wa Village, Yunnan Province, where he learned about the family’s daily life, and was invited to join the family in making rice cakes. He also beat a wooden drum of the Wa ethnic group three times, a local ritual activity to bless the coming year.

The year 2020 marked the deadline for China to eliminate absolute poverty. During the inspection, Xi noted that shaking off poverty is the starting point for a new and happy life, calling for vigorously promoting rural vitalization after a moderately prosperous society in all respects is achieved.

Xi visited the hutong neighborhoods of central Beijing and particularly dropped in on an express delivery station there, stressing that priority should be given to solving employment problems and creating more jobs.

He praised the hard work of deliverymen, saying they were “busy as bees” to bring convenience to people’s lives.

In two ethnic Yi villages, Xi was happy to learn that villagers have increased their incomes by raising cattle and growing potatoes, peppers and walnuts.

“Not a single ethnic group or family should be left behind in building a moderately prosperous society in all respects,” Xi said.

He also told villagers later during the inspection: “My job is to serve the people.”

Xi went to a village in Hebei Province, a short drive from Beijing. In the house of poor villager Xu Wan, Xi asked about the family’s drinking water, TV programs and activities it had planned for the Lunar New Year.

Xi even sat down with Xu and helped him with his household budget.

While visiting villager Xu Haicheng’s home, Xi chatted with village cadres and farmers, and said poverty eradication is the “bottom-line task” in building a moderately prosperous society in all respects.

Xi visited the house of Zuo Xiufa, grandson of a revolutionary martyr living in a poverty-stricken village in the city of Jinggangshan, Jiangxi Province. Xi was glad to see that Zuo had shaken off poverty by using local bamboo resources to start his own processing business.

Calling Jinggangshan the cradle of the Chinese revolution, Xi called for carrying forward the Jinggangshan Spirit in the modern context.

Xi met with old acquaintances from Liangjiahe Village, Shaanxi Province, where he had spent seven years as an adolescent and young adult. “I will never forget the villagers here and the people in the old revolutionary base,” Xi said.

“A well-off society is incomplete if people in old revolutionary base areas cannot shake off poverty,” Xi said later during a meeting with officials from Shaanxi and neighboring provincial regions in northwest China.

Inside the house in a dilapidated neighborhood, Xi checked the cellar and the fireplace and chatted with Guo to learn about his difficulties.

He later went to a children’s welfare home where he used sign language to interact with the hearing-impaired. Xi called for love for children, especially orphans and the disabled, from across the society.

Xi went to villages located in a hostile natural environment in northwestern Gansu Province, asking villagers whether they had enough food, sufficient subsistence allowances, and access to medical and educational resources.

He emphasized stepped up efforts to ensure millions in arid parts of Gansu have access to stable supply of drinking water.

Xi also visited a construction site to learn about the rebuilding work of the county seat, where a landslide two years earlier had caused severe damages. There, he chatted with migrant workers, ordering better protection of their legitimate rights and interests.