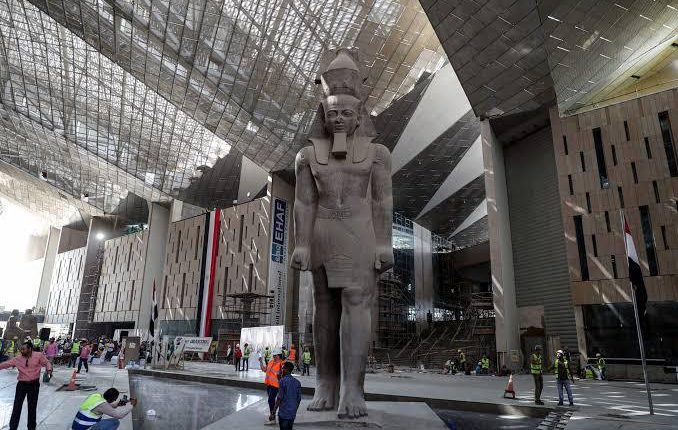 An official visit to the Grand Egyptian Museum (GEM) by a UNESCO World Heritage Center and Heritage Division team, headed by its director Mechtild Rössler, took place on Friday.

The delegation was escorted by Secretary-General of Egypt’s Supreme Council of Antiquities Mostafa Waziri.

At the museum, they were received by Atef Moftah, General Supervisor of the GEM project, and Eltayeb Abbas, Assistant Minister of Tourism and Antiquities for Archaeological Affairs at the museum.

The visit included a tour inside the GEM’s Conservation Center laboratories, the Hanging Obelisk Square, and the Great Hall which houses a statue of King Ramesses II.

The UNESCO delegation also visited the Grand Staircase with its monumental pieces, as well as the two exhibition halls dedicated to the collection of the boy Pharaoh Tutankhamun’s treasures.

Moftah presented Rössler and the members of the visiting delegation with distinctive pieces which were created by the GEM Arts and Crafts Centre, as a memento of their visit.

Rössler left a message in the official GEM Guestbook, highlighting her admiration and respect for the museum and its design, its unique façade, its innovations and distinctive ideas.

The UNESCO delegation expressed its appreciation of the Egyptian antiquities presented at GEM, and applauded the great achievements of the museum’s staff involved in this huge project. About 97% of the construction work on the museum has been completed, with its opening set to take place in the second half (H2) of 2021.

The display areas in the galleries devoted to the Pharaoh Tutankhamun have all been completed, and are currently undergoing testing. In addition to this, 90% of the artefacts that will be housed on the Grand Staircase have been installed, and the control systems and surveillance cameras are also being finalised.

A study is currently being undertaken to connect the Fayoum Road with the museum, using a cable-car system.

The Grand Egyptian Museum is one of the largest museums in the world dedicated to one civilisation, focusing entirely on Egypt’s ancient world, and its opening later this year is eagerly awaited.

The striking museum facade was constructed using local materials, and with its construction having cost only 10% of the original estimates, savings of more than $180m have been made.

A booklet has been issued by the museum entitled “We Have Never Stopped in the Face of Coronavirus”. It documents all the precautionary measures that have been taken since March 2020 against the novel coronavirus (COVID-19) pandemic.

The booklet shows the museum’s measures in order to complete the construction work, as well as curb the spread of the virus, whilst protecting the health and safety of all its employees. These measures will also serve as a strong foundation for workers dealing with future outbreaks.

Work at the museum continued, despite the precautions put in place for much of 2020, in order to complete the museum.

As part of the continuous international communication and cooperation on the project, a joint proposal between the Egyptian Embassy in Japan and the Grand Egyptian Museum Project was undertaken.

The two sides proposed an idea to promote GEM before the official opening, by creating a symbol of friendship which will be sponsored and marketed by the Egyptian Embassy in Japan. This is set to take place through magazines as an innovative way of encouraging people in Japan to visit Egypt, and more specifically GEM.

The idea was presented to the museum’s Board of Directors, which provided its support for the proposal from the initial steps of the process, to the promotional plan, final design and approval.

Moftah prepared the design of the friendship symbol, a shape that merges a symbol shared by both Egyptian and Japanese civilisations, namely the sun disk with the unique facade of GEM.

Following the Board of Directors’ endorsement of the design, the promotional plan was put into action.

It was agreed that the Egypt International Station magazine, headquartered in Japan under the direction of editor-in-chief Abdel-Rahman Yunus, would implement the promotional campaign.

The magazine participated in and promoted the Egyptian-Japanese Symbol of Friendship in a competition, in which 475 magazines from all over Japan took part.

The symbol won first prize for its distinguished design and the associated promotional campaign, and represents a triumph, due to its being one of the most important prizes awarded by the Japan Tourism Authority.

These achievements serve as confirmation of the constant efforts made by GEM to apply all international scientific standards. These include quality assurance, planning, performance evaluation, as well as achieving environmental sustainability.

The museum’s overall area includes the 117 acres of the Giza Plateau and the area that links the GEM to the Giza Pyramids, where the Armed Forces Shooting Club once stood, bringing the total area of the museum to 3,800 feddan.

The museum is a one of a kind cultural space, tailor-made to preserve and exhibit Egypt’s precious national heritage with state-of-the-art conservation laboratories. It comes along with educational facilities, temporary exhibition halls, a children’s museum, a conference centre, restaurants, cafes, shops and large gardens for everyone to enjoy.

GEM will house over 5,000 artefacts from the royal tomb of Egypt’s most famous Pharaoh Tutankhamun, many of which have never been seen in public before. The Main Galleries show material from the Prehistoric to the Roman periods, while the museum’s entrance areas focus on Kingship and Power.

All GEM exhibitions will be contextualised for the visitor, with stories, texts, digital interactives and media displays.

The Grand Egyptian Museum will also contain the first ever hanging obelisk on show at the entrance of the museum. The design allows the visitor to enter the obelisk base to see the archaeological base below it and by looking at the top of the obelisk, cartridges of King Ramesses II can be seen.