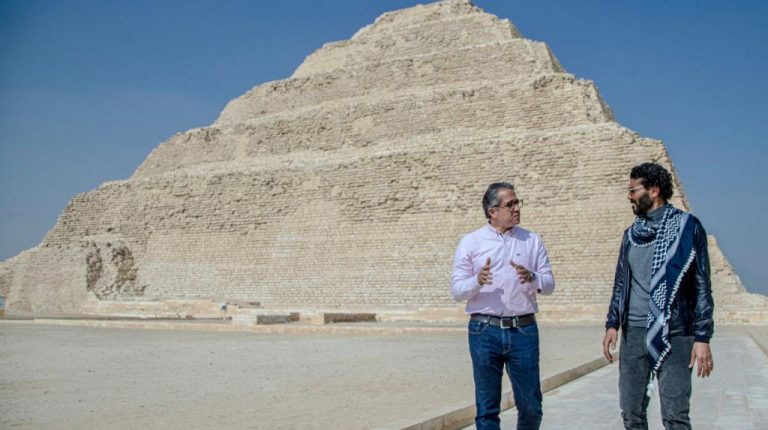 Egypt’s Minister of Tourism and Antiquities Khaled El-Anani has met with the internationally-acclaimed Egyptian actor Khaled El-Nabawi during filming for a promotional cultural tourism video.

The ministry is shooting a promotional film, starring El-Nabawi, which details the Egyptian civilisation. The production will be filmed at a number of archaeological sites across Egypt, with Saturday’s meeting between El-Anani and El-Nabawi taking place at the Pyramid of Djoser in the Saqqara archaeological area.

The new promotional film, “A tourist’s trip in Egypt”, was launched by the Ministry to promote various Egyptian tourist destinations. It also aims to shed light on the precautionary measures implemented in airports, hotels, archaeological sites and museums.

The film comes as part of the Ministry of Tourism and Antiquities’ plan to promote Egyptian destinations and raise awareness among citizens. This comes in addition to introducing the ancient Egyptian civilisation, and promoting Egypt on a regional and international level.

The aim is to showcase Egypt’s many and varied tourism hotspots, especially those which reflect its deep and rich cultural tourism, and which are very important for the country’s tourism.

In addition to his widely-acclaimed career in a number of international films, the Ministry chose El-Nabawi to star in the film due to his having played a significant role in the campaign to promote Egypt’s tourist and archaeological sites. The campaign, called “Come to Egypt”, invited tourists from all over the world to visit Egypt.

In the past few months, the Ministry of Tourism and Antiquities has produced a number of promotional films for domestic, Arab and international tourists. This includes the song “Egypt, The Land of Beauty”, which the ministry launched at the beginning of last month.

The song aims to highlight the beauty of Egypt and its touristic attractions, whilst inviting everyone to visit Egypt.