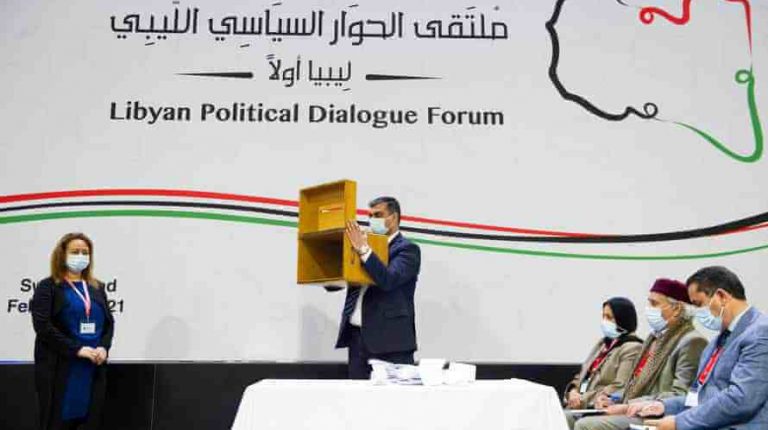 The Libyan Arab Armed Forces (LAAF) has welcomed the appointment of an interim government to lead the war-torn North African country through to national elections scheduled for later this year.

In a statement, the LAAF, led by Commander Khalifa Haftar, congratulated the representatives who were chosen in the UN-brokered process that recently took place in Geneva.

“The Libyan people hope that it will work tirelessly to provide services and prepare the country for general elections on 24 December 2021,” the statement said, referring to the interim government, which includes a prime minister and three-seat Presidential Council.

In a Saturday video address, LAAF spokesman Ahmad Al-Mismari congratulated the new appointees, adding, “Libyans hope that the activities of the new executive leaders of Libya will prepare all the conditions for holding national elections.”

The Libyan Political Dialogue Forum (LPDF), which included 75 UN-picked delegates from across Libya, appointed Mohammad Younes Menfi, a diplomat from the country’s east, as Chairperson of the Presidential Council.

The forum also chose Abdul Hamid Mohammed Dbeiba, a powerful businessman from the western city of Misrata, as Prime Minister, with Musa Al-Koni and Abdullah Al-Lafi taking up roles as members of the Presidency Council. The three council members each represent a region of old Libya: Tripolitania in the west, Cyrenaica in the east, and Fezzan in the southwest.

Egypt’s President Abdel Fattah Al-Sisi has given his support to a transitional government that would lead neighbouring Libya through elections later this year.

In televised comments late on Saturday, he said that the appointment of the interim government on Thursday was “a step in the right direction”.

“We are supportive of them, and we are ready to cooperate with them for Libya’s recovery and to prepare for the elections in Libya,” he said, adding that the calls for military action helped “start a genuine period for peace” in Libya.

Similarly, UN Secretary-General Antonio Guterres welcomed, on Friday, the formation of the new interim government, and called on all Libyan and international parties to respect the results.

“My appeal to everybody is to recognise and accept these results and to work with the new authorities that were elected,” Guterres told reporters, “It is absolutely essential to unify Libya, and to move onwards on the way to peace.”

Stephanie Willams, acting Special Representative and head of the UN Support Mission in Libya (UNSMIL), said that she was pleased to witness this historic moment.

“The importance of the decision that you have taken here today will grow with the passage of time in the collective memory of the Libyan people,” she said.

Egypt has for long viewed the instability in Libya as a national threat, and has hosted a number of conferences and meetings with Libyan and international diplomats. These have sought to encourage the disputing sides in the conflict to start negotiations and dialogue.

“We are keen that each move … aims to build peace, prosperity and maintain stability in a region that has been suffered in the past 20 years a very great shock,” Al-Sisi said.

In January, Egypt hosted a UN-sponsored meeting under in the Red Sea city of Hurghada, which was attended by two delegations from Libya’s House of Representatives and the High Council of State.

Libya descended into chaos following the 2011 uprising that ousted long-time dictator Muammar Gaddafi. The country has since 2015 been divided between two governments, one in the east and one in the west, with each backed by an array of militias and foreign governments.