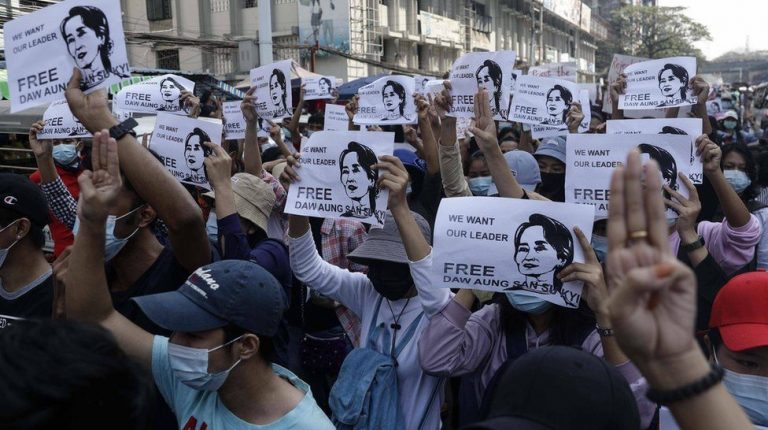 Despite the internet blackout implemented by the junta, protest crowds have only grown bigger. Sunday’s protests are the largest since the 2007 Saffron Revolution that helped lead to democratic reforms.

Thousands of labour union and student activists, as well as members of the public, sported red shirts, red flags and red balloons, the colour of Suu Kyi’s National League for Democracy Party (NLD).

An internal note for United Nations (UN) staff estimated that 1,000 people had joined a protest in Myanmar’s capital, Naypyidaw, while there were 60,000 in Yangon alone, Reuters reported.

On Sunday afternoon, the military rulers reportedly ended a day-long blockade of the internet that had further inflamed anger since the coup last Monday. The military’s move has halted the Southeast Asian country’s troubled transition to democracy, and drawn international outrage.

The US Embassy in Myanmar called on the military to give up power and restore the democratically elected government, release those detained, lift all telecommunications restrictions, and refrain from violence.

“We support the right of the people of Myanmar to protest in support of the democratically elected government and their right to freely access information,” it said in a tweet.

Army Commander Min Aung Hlaing carried out the coup on the grounds of fraud in the elections that took place in November last year, and in which Suu Kyi’s party won a landslide. The electoral commission dismissed the allegations of malpractice.

UN Secretary-General Antonio Guterres had earlier denounced the coup, and pledged to do everything possible to unite the international community, whilst creating conditions for the military takeover to be reversed.

“Myanmar’s military and police must ensure the right to peaceful assembly is fully respected and demonstrators are not subjected to reprisals”, the Office of the United Nations High Commissioner for Human Rights (OHCHR) said in a Tweet on Saturday.

Earlier in the week, UN High Commissioner for Human Rights Michelle Bachelet raised concerns of a “violent crackdown on dissenting voices” in Myanmar.

Bachelet also reminded the military leadership of the country’s obligations under international human rights law to ensure people’s rights are protected, and to refrain from using unnecessary or excessive force.