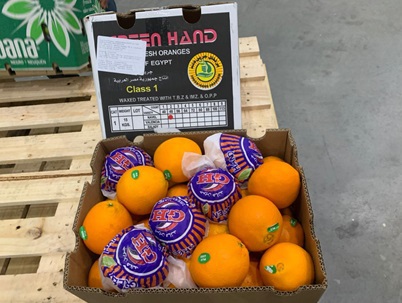 Egypt’s Minister of Trade and Industry Nevine Gamea announced, on Monday, that the first shipments of locally produced orange have been exported to the Brazilian market, in cooperation with the Brazilian Embassy in Cairo.

The shipments represent the first of the new season going to the South American country, with Gamea noting that this success comes as part of the free trade agreement signed between Egypt and Mercosur countries. Other countries that are part of the Mercosur area include Argentina, Uruguay, and Paraguay.

The minister noted the importance of this agreement in opening new markets to Egyptian products, particularly in South America.

Ibrahim Al-Sigini, Assistant Minister of Trade and Industry for Economic Affairs, said that a Brazilian technical mission visited Cairo in 2020, to negotiate the final import of Egyptian citrus fruits to its markets.

During their visit to Egypt, the mission inspected a number of Egyptian citrus farms, accompanied by plant health specialists at the Egyptian Plant quarantine. The mission’s visit came in preparation for the opening of the Brazilian market to Egyptian citrus exports.

Al-Sigini pointed out that the Ministry of Trade and Industry’s Foreign Trade and Agreements Sector held a series of meetings with Egyptian businessmen and exporters. These meetings took place in cooperation with the Brazilian Embassy in Cairo and the Arab-Brazilian Chamber of Commerce in São Paulo.

He said that these meetings aimed to introduce privileges and customs exemptions provided by the free trade agreement between Egypt and the Mercosur countries.

He also said that the last period has experienced several rounds of technical consultations between Egypt’s Ministry of Agriculture and its Brazilian counterpart. These consultations resulted in the registration of Egyptian garlic and oranges in Brazil in May 2020.

Brazilian importers welcome Egyptian oranges, which are characterised by high quality and competitive prices, as the Brazilian market is the largest South American market, with about 209 million consumers, Al-Sigini said.