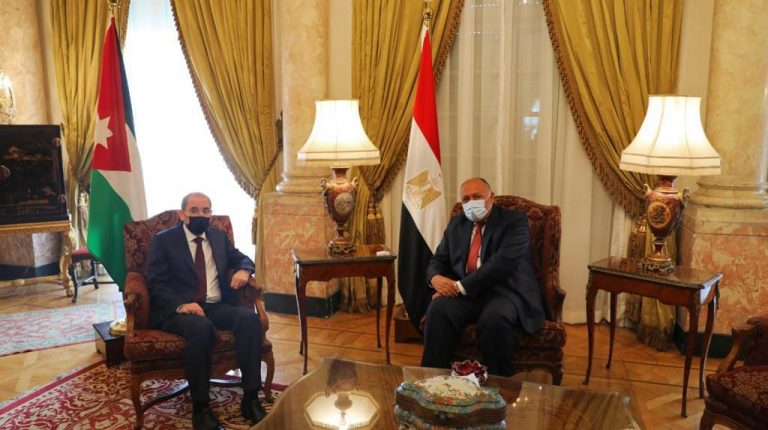 Egypt’s Minister of Foreign Affairs Sameh Shoukry and his Jordanian counterpart, Ayman Safadi, have reaffirmed the Arab stance on the Palestinian issue during their meeting on Monday.

During the meeting, the two ministers also highlighted the endeavour to provide the necessary political climate to re-engage the Palestinian and Israeli sides in serious negotiations.

This is especially needed in the context of the momentum generated by successive meetings, with both Egypt and Jordan’s participation. This comes as part of the work of the Quartet, which Egypt and Jordan are a part along with France and Germany, or the tripartite meeting with the Palestinian Minister of Foreign Affairs in Cairo.

Ahmed Hafez, Spokesperson for Egypt’s Ministry of Foreign Affairs, said that the two ministers held a meeting prior to the start of the emergency meeting of Arab Foreign Ministers.

The meeting witnessed a consensus of visions between the two sides regarding regional developments and issues of common concern. Both Shoukry and Safadi noted that all foreign interference in Arab affairs should be stopped, and solutions should be reached for all political crises in the region.

This should take place in a way that pushes towards establishing security and stability and preserving the Arab peoples’ capabilities.