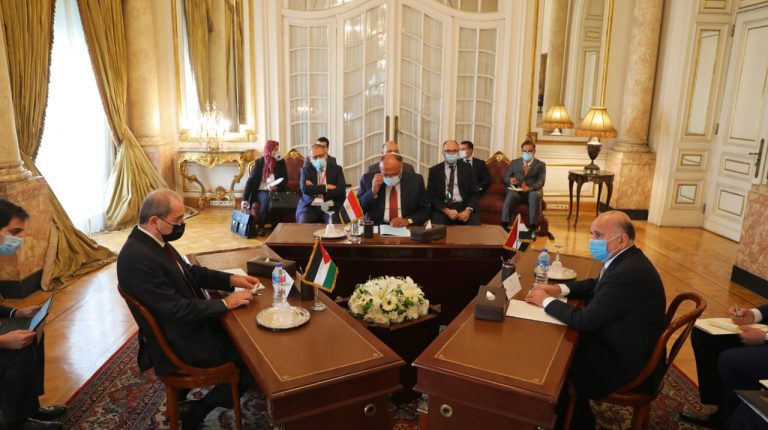 The Ministers of Foreign Affairs representing Egypt, Jordan, and Iraq held a meeting in Cairo, on Monday, to discuss developments in the tripartite joint cooperation path.

Present at the meeting were Egypt’s Minister of Foreign Affairs Sameh Shoukry, his Iraqi counterpart Fuad Hussein, as well as his Jordanian counterpart Ayman Safadi.

The tripartite cooperation comes in implementation of the directives of the political leaders in the three countries.

During the meeting, the three ministers discussed the latest developments in strategic areas of joint cooperation, and ways of advancing towards achieving economic integration.

Also discussed were economic and mutual benefits of the cooperation, in addition to the growth and prosperity of the three countries.

The ministers expressed their satisfaction with the achievements made in the period since the Amman Tripartite Summit in August 2020. They stressed their respective countries’ commitment to continuing joint cooperation and close coordination, to accelerate the implementation of strategic projects.

Ahmed Hafez, Spokesperson for Egypt’s Ministry of Foreign Affairs, noted that the meeting aimed to undertake a political consultation on the latest developments in the region.

Visions were exchanged on the Palestinian cause and the peace process, as well as on the situations in Syria, Yemen and Libya, whilst emphasising the importance of reaching political solutions in conflicts that these countries.

The ministers also noted that it is essential to halt foreign interference in the internal affairs of countries across the Middle East, in order to be able to preserve their sovereignty, security and stability. It was also agreed to reinforce joint efforts to combat terrorism and maintain security and stability in the region.

Hafez added that the meeting also stressed the top priority given to the Arab region’s water security, especially given the challenges of water rights that many countries in the region face. The ministerial meeting emphasised support for the Arab side in this regard.