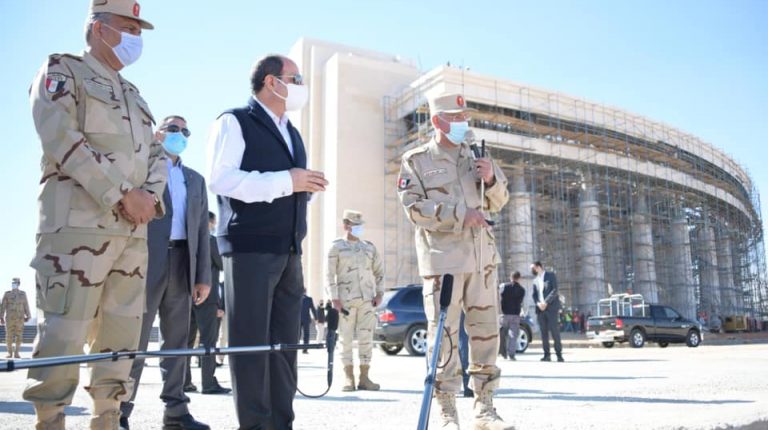 Egypt’s President Abdel Fattah Al-Sisi undertook an inspection tour of the New Administrative Capital (NAC), on Monday morning, to follow up on the latest developments at several neighbourhoods and facilities.

The President inspected the Egyptian Cultural Center, which is surrounded by the Great Mosque of Egypt, which, with its capacity to reach 107,000 worshipers, is one of the largest mosques in the world.

The mosque features minarets of 140 metres in height, as well as a group of huge halls for celebrations and events, and where memorising of the Quran can take place. It also includes a parking lot and a multi-storey garage, with a total capacity for 3,000 cars.

Also during his visit, Al-Sisi inspected the new Parliament building, the largest in the Middle East, with a main hall that can accommodate as many as 1,000 individuals. Its enormous size means that it is three times the size of the current Parliament building in Cairo.

The building includes a civil registry, listening rooms, media and information centres, as well as a training centre, in addition to green spaces. The main hall is surmounted by a central dome, which is one of the largest domes constructed in the world.

The President went on to inspect the various governmental buildings that are being constructed at the New Administrative Capital, such as the cabinet. He was also briefed on the People’s Square, which has the highest and largest flagpoles in the world, as well as a monument which was designed with a Pharaonic character. The monument makes use of columns and decorations in two parts, featuring a circular shape with the names of Egypt’s martyrs over the ages.

Officials briefed Al-Sisi on the construction sites that are part of the ongoing implementation plans and completion rates. The President has directed for adherence to the specified timetables and the controls of engineering construction standards for all buildings and establishments underway. This comes as part of the Egyptian government’s efforts to ensure that NAC represents Egypt as a modern state.