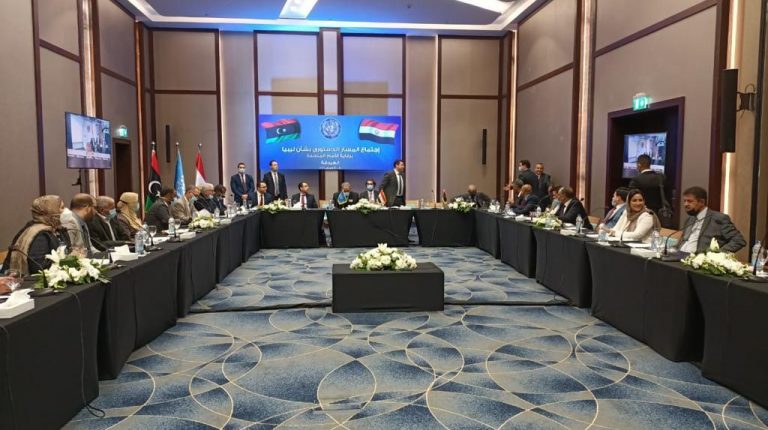 A high-level Libyan committee will hold its third meeting, on Tuesday, to discuss the arrangements necessary to conduct a referendum on the Libyan constitution.

The three-day meeting, hosted by Egypt, is being held under the sponsorship of the United Nations (UN).

Two delegations from Libya’s House of Representatives and the High Council of State are participating in the meeting, in the presence of the President of the High Electoral Commission, Imad Al-Sayeh.

The heads of the two delegations expressed Libya’s appreciation for the support given by Egypt’s President Abdel Fattah Al-Sisi and the Egyptian government, adding that Egypt only aims to help Libya achieve stability.

In his remarks, Al-Sayeh asserted the importance of investing in the positive atmosphere that Libya is currently experiencing. This includes the choice of a new executive authority, and the good results achieved by the 5+5 Libyan Joint Military Commission. He confirmed the commission’s readiness to hold the referendum on the Libyan constitution.

Moreover, UN Special Envoy on Libya Jan Kubis expressed his thanks to the Egyptian government for its support for the political solution in Libya and for hosting the constitutional meetings.

Kubis noted the importance of this meeting, as following its approval of the Libyan constitutional referendum’s form, it will directly affect the Libyan people.

He said that it is important to reach an agreement on the referendum’s form during this meeting, in order to not affect the rest of the political and military tracks.

Egypt has hosted several meetings in Cairo and Hurghada over the past few months, as part of its efforts to help resolve the crisis in Libya.

The Libyan envoys at UN-backed talks in Egypt agreed, last January, to hold a constitutional referendum before the Libyan elections, which have been scheduled for 24 December 2021.

They agreed to hold new talks in February with a view to settling the road map for the referendum and elections.