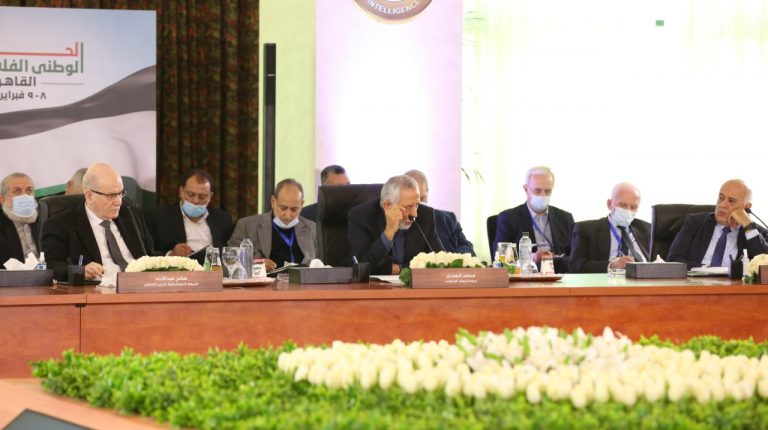 The political factions participating in the Palestinian National Dialogue have agreed to hold parliamentary elections, followed by presidential elections, in accordance with the presidential decree issued on 15 January 2012.

The meeting, which was hosted in the Egyptian capital of Cairo, under the patronage of President Abdel Fattah Al-Sisi, concluded on Tuesday after two days of discussions.

The factions agreed to hold another meeting in Cairo next March, where they will discuss the bases and mechanisms needed to complete the formation of the new National Council. This will come with the aim of developing the Palestine Liberation Organization (PLO).

The final statement released following the meetings affirmed that the factions will adhere to the timetable set by the January 2012 decree. The statement emphasised that the elections will be held in Jerusalem, the West Bank, and the Gaza Strip without exception.

At the same time, the factions asserted their commitment to respecting the final results of the elections, and stressed their support for the central elections and working to overcome any obstacles.

The Palestinian President will issue a decree forming the court, which will also clarify its duties in accordance with the law. Palestinian police forces in the West Bank and Gaza Strip will be responsible for securing the elections.

The final statement also called on Palestinian President Mahmoud Abbas to issue a decree regarding the release of all detainees on a factional background or for reasons related to freedom of opinion. This would also guarantee a free political life for all factions in the West Bank and Gaza Strip.

They called for the halt of citizen prosecutions as a result of their political affiliation or opinions, which will provide a convenient and appropriate political environment for holding the elections.

The factions stressed the need for ensuring full freedom for political advertising, publishing, printing, and holding political and electoral meetings for any political party.

The statement affirmed the importance of the impartiality of police forces in elections in the West Bank and Gaza Strip, and to refrain from interfering in elections or propaganda for any political party. It also stressed that the media will provide equal opportunities to all electoral lists without discrimination.

The statement also highlighted the need to address the repercussions of divisions of all kinds on a comprehensive and fair national basis that would be free from all manifestations of geographical and political distinction.

The factions will submit a recommendation to President Abbas, to consider amending the following points to the election law. They will be also submitting a recommendation to the new Legislative Council to look into the issue of detained political officials.

At the same time, the factions highlighted that all necessary mechanisms should be taken to ensure the conduct of elections in Jerusalem. At the end of their statement, the factions greeted all detained Palestinians, and urged candidates to represent them and work on their release from prisons.

Also on Tuesday, Egypt opened the Rafah border crossing with the Gaza Strip until further notice, in a move described as an incentive for reconciliation between the main Palestinian factions meeting in Cairo.

The Palestinian National Dialogue started, on Monday, with the participation of 15 political factions, to address long-standing divisions ahead of elections planned for later this year.