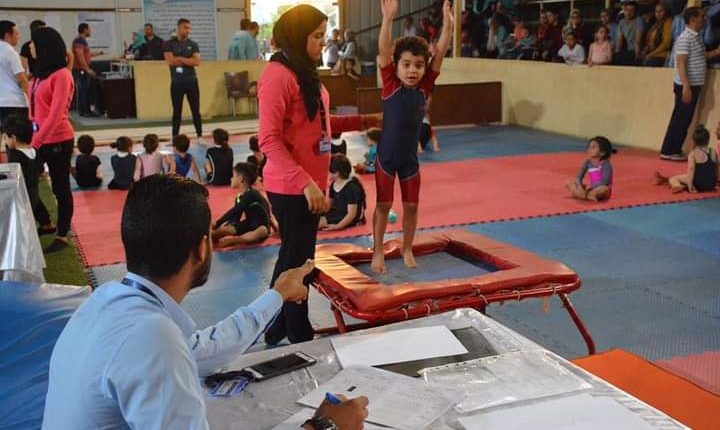 At a time when football is very popular, having already gained widespread public attention and economic support, individual games academies have recently begun to surge worldwide.

Despite many of these academies having proven their success in the private sector, the state has also shifted to putting in place similar projects, in order to target potential top-level athletes.

The Ministry of Youth and Sports has awarded its National Project for Talent and the Olympic Champions a budget of EGP 40m. It covers 282 training centres, and features the participation of 2,856 male and female athletes in 11 sports

The state has allocated a budget of EGP 40m for the project, compared to EGP 34m in the last fiscal year, in addition to EGP 16m in support of the project from the private sector.

The project’s strategy is based on phases, the first phase of which takes place in youth centres, where players are selected from the age of 10 years. During this phase, the project managers undertake physical measurements to determine the games that the youth can play, and participate in the regional tournaments, for a period of two years.

If they achieve good results, they are moved to the elite phase, in which they gain access to foreign camps to be ready for the final phase.

The National Project for Talent and Olympic Champions aims to build a base of talented athletes in Egypt who will go on to become the mainstay of the national teams. This is set to happen after the players go through six years of training within the project.

The Ministry of Youth and Sport is implementing a national squash project at two centres in the governorates of Cairo and Port Said. It will see the participation of 385 players. The National Bank of Egypt (NBE) has contributed annual sponsorship of EGP 5m to supporting the project.

In addition to this, the ministry  launched the selection tests for the National Project for Squash Talents in January 2020, to select the best 250 players in the governorates of Cairo and Port Said. The applicants were tested and selected by leading squash experts, in cooperation with the Egyptian Squash Federation, before the number was raised to 385 players.

The project participants are among the emerging talents who were born in 2012-2014, and who are hoped will go on to form a broad base of squash players. It will help prepare new future generations of Egyptian squash players to maintain the country’s leadership in the game.

The ministry signed contracts with private sector institutions to sponsor champions and sports teams qualifying for the Olympic Games. So far, 50 male and female athletes in individual and team games have received about EGP 50m.

The Ministry of Youth and Sports has also signed cooperation protocols with the NBE, Banque Misr, and the Commercial International Bank (CIB). This is with the aim of sponsoring a number of sports and youth projects, in coordination with the Federation of Egyptian Banks (FEB).

The cooperation protocols aim to provide support for sports and youth activities worth EGP 32m for a period of three years at EGP 8m per bank.

According to the signed protocols, the National Talent and Olympic Champions Project will be sponsored, which aims to support the best national teams at the 2024 and 2028 Olympic Games. The sponsorship also includes youth centres and the youth train project, and sponsoring the creativity festival to discover talented athletes.

In 2004, Ahmed El-Gendy, Chairperson of the Alamalreyada sports academy, decided to establish the first specialised sports academy for children at Makram Ebeid Street, in the Cairo district of Nasr City.

Since then, the company has continued to expand the number of its academy branches, and now boasts nine, in addition to a branch in Malaysia.

Walid Al-Kashef, a consultant to the Alamalreyada, told Daily News Egypt that the company’s main branch in Egypt is located in Al-Wafaa and Al-Amal, along with two branches in Zahraa Madinat Nasr.

It also has a branch each in Al-Fardos behind the Al Ahly SC, the American International School (AIS) in the Fifth Settlement, the Artillery House, and Almaza Park. There are other branches at the Narmer School, with work to set up a branch at the Al-Galaa Club underway.

He said that the company rents vacant lands and prepares them as stadiums provided that the rent is under the usufruct system for a number of years, usually five, and the rental value increases by 10% annually.

Al-Kashef also said that the main branch is the largest of all the branches, extending over an area of ​​15 feddans. It includes 14 stadiums and two full-size football fields, along with covered halls, a swimming pool, and basketball and volleyball courts.

He added that World of Sports is an Egyptian joint stock company with a capital of EGP 10m. Operating expenses differ according to the sport, particularly as there are trainers who work with monthly salaries and others with a percentage of contributions.

There are currently over 8,000 players taking part in the Alamalreyada’s activities, of whom about 4,500 are in the main branch.

There are two types of participants, namely those who play in sports teams which are present throughout the year, and those who participate only during the summer and their activity is only for fun.

Al-Kashef mentioned that the subscription prices start from EGP 250, rising up to EGP 600 depending on the age and the game itself. For example, the first stage of kung fu practice starts at EGP 250, while tennis starts from EGP 450.

Participants are enrolled from the age of two and a half years of age, all the way up to 16 years old, with the exception of taekwondo, whose players can be up to 19 years old.

He added that the academy owns four swimming pools in the main branch at Al-Wafaa and Al-Amal, as well as at the branches in Al-Fardos, the AIS, and Zahraa Madinat Nasr. The academy has successfully trained up world champions in taekwondo, who have done well in the under-14s age group.

Al-Kashef mentioned that the academy specialises in teaching young people and children, beginning with training in gymnastics and swimming.

He revealed that there were negotiations to open branches in Morocco, the United Arab Emirates, and Saudi Arabia, but these have been put on hold due to the novel coronavirus (COVID-19) pandemic. He added that there are offers to set up branches in the governorates, but the issue is finding suitable places.

Al-Kashef pointed out that the academy has faced obstacles in that they have been forced, like other academies, to play in competitions organised by federations under the names of clubs. This is due to the Ministry of Youth and Sports’ stipulation that academies are not allowed to participate in official competitions.

He added that in Egypt, little attention is given to individual games due to people being more concerned with team games such as football. This is despite the importance of individual games and the fact that they can be an excellent source of medals at Olympic Games. It is also a matter of being able to turn sports into investments, which has been supported by the success of academies.

Al-Kashef noted that the Alamalreyada does not make any profits from all sports, although swimming and gymnastics are the most profitable. For team sports, the cost increases as coaches’ minimum wages start from EGP 3,000.

He explained that the effects of the coronavirus pandemic remain, with many families hesitant at sending their youngsters back to sports academies once they resumed their activities last July. This hesitancy was further compounded both by the school year beginning and the second wave of the pandemic taking place.

The pandemic has had a negative impact on revenues, with a decline of at least 80%, he added, with this having an additional impact on the expansion and development projects that the company undertakes.

Al-Kashef noted that the Alamalreyada also owns a production line of sportswear that the academy benefits from. Its products are also sold in the branches of Al Shams Club and behind the Al Ahly SC in Nasr City, as well as its various branches. He added that, whilst the academy’s products were initially produced in China, the cost of importing the items is high, and there were many obstacles to overcome. Manufacturing has now shifted to Egypt, where products are created according to international sp