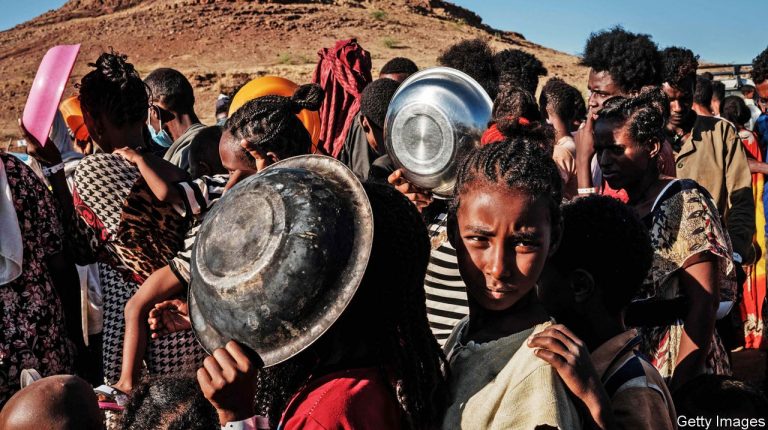 The Ethiopian Red Cross said Wednesday that 80% of Tigray’s 6 million people in the country’s conflict-hit Tigray region were cut off from humanitarian assistance.

The president of the Ethiopian Red Cross Society, Ado Abera Tola warned that tens of thousands could starve to death and that and “emaciated” women and children fill displacement camps.

Abera statements underscored the humanitarian tragedy in the Tigray region since the conflict broke out early November 2020.

It is estimated that thousands of fighters and civilians have died, and around 4.5 million people require emergency food assistance, of whom an estimated 2.2 million are displaced since Ethiopian Prime Minister Abiy Ahmed ordered the military operation against the region’s former ruling party, the Tigray People’s Liberation Front (TPLF).

The Ethiopian Red Cross president indicated that starvation deaths have already been reported and the figures could climb fast.

“The number today could be one, two or three, but you know after a month it means thousands. After two months it will be tens of thousands,” he said.
Once humanitarian workers can reach Tigray’s rural areas, “there we will see a more devastating crisis,” Abera said. “We have to get prepared for the worst, is what I’m saying.”

He described seeing displaced women and children in the northern town of Shire who were “all emaciated … their skin is really on their bones.”
“Sometimes it is also really difficult to help them without some kind of high nutritional value foods.”

Similarly, Francesco Rocca, president of the International Federation of Red Cross and Red Crescent Societies told the Associated Press that accessible hospitals in Tigray are “barely working” with no medicines, no food for patients and no psychosocial support — “something surreal” after being looted or damaged.

On Tuesday, the EU Civil Protection and Humanitarian Aid Operations said that it is estimated that thousands of fighters and civilians have died in Tigray conflict. It added that around 4.5 million people require emergency food assistance, of whom an estimated 2.2 million are displaced. Over 60,000 have crossed the border into Sudan in search of safety.
Three months on, the security situation in the Tigray region remains unstable. Fighting is still reported in many parts of Tigray.

Due to the conflict, humanitarian organisations have had only very limited access to the region.

In late January 2021, a team of EU humanitarian experts was able to travel to Tigray capital Mekelle and surrounding areas. They found destruction, looting, people traumatised by the conflict and living in the shadow of a strong military presence.

Ethiopia’s foreign ministry on Tuesday issued a statement saying it was “deeply concerned” about statements out of Brussels about the situation in Tigray.

“As has been stated time and again in many of the Government’s communications and briefings given to the international community, access to many of the humanitarian actors has been given to many of the places in Tigray under a government-led process,” the statement said.