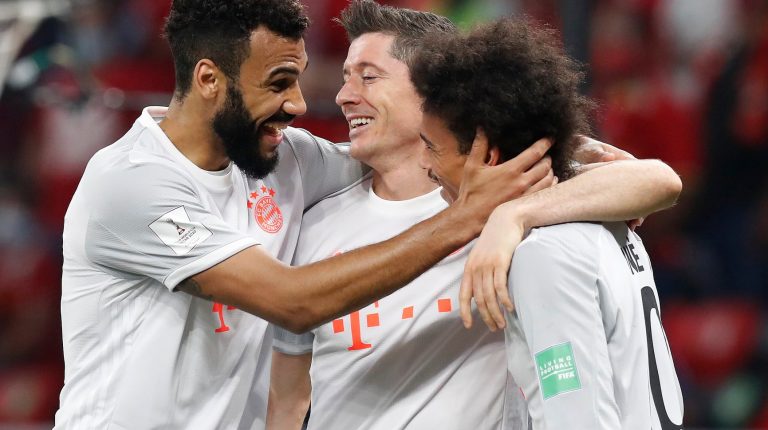 Football fans are all set to tune in to the Education City Stadium in the Qatari capital of Doha, on Thursday night, to see what happens in the 17th FIFA Club World Cup final.

Bayern reached the final after its 2-0 victory in the semi-finals against Egypt’s Al Ahly, with both goals scored by Polish legend Robert Levandowski in the 17th and 86th minutes.

The Germans are looking to continue their dominance at international tournaments this season, having already won the European Champions League, European Super Cup, German League and Cup, and the local Super Cup. The team hopes to achieve their sixth title, which will equalise them with Barcelona’s titles haul in the 2009/10 season.

The Bavarian giants have grabbed several records in the 2020/21 season, after being crowned Champions League winners for the sixth time in their history. They won all their matches on the way to taking the Champions League crown, becoming the first team to achieve 11 such victories.

Bayern Munich also became the second team to twice achieve the historic triple of their national League, Cup and European Champions League title in one season, after Barcelona. The team is also heading to becoming only the second team to achieve a historic six titles in one season, after securing the Bundesliga, DFB-Pokal, DFL-Supercup, UEFA Champions League, and UEFA Super Cup.

Bayern Munich coach Hans Flick is also awaiting a record of his own in the event the Bavarian giants are crowned as FIFA Club World Cup champions. Should the team win, he will become the second coach to achieve the historic six titles behind Spain’s Pep Guardiola, who achieved it with Barcelona.

Posting on its official Twitter account, the Bavarian club announced that it is working towards achieving that sixth title, noting that there was only “One step remaining”.

Lewandowski, who is also the team’s top scorer, stressed the value of winning this championship and achieving a new record, saying, “We have a chance to win the sixth title. We know the value of that, not only in the history of Bayern, but in all of football. We want to show that we are determined to win this competition.”

On the other hand, Mexico’s Tigres UANL, who won the CONCACAF Champions League, is entering the historic meeting, after a difficult semi-final victory over its Brazilian rivals Palmeiras.

They got through following a goal scored by Andre Pierre Gignac in the 53rd minute from the spot.

The Mexican team is participating in the FIFA Club World Cup for the first time in its history, and also represents a Central American team’s first participation in the tournament.

Tigres UANL seek to make history and win the tournament’s top prize, writing itself into the history books should they defeat Bayern Munich in the final.

The Mexican team knows the difficulty of that confrontation and the strength of the opponent, but is preparing for this match with high concentration and enthusiasm.

Egypt’s Al Ahly will bring their campaign at the FIFA Club World Cup to an end in Doha, when they face Brazil’s Sociedade Esportiva Palmeiras at the Education City Stadium on Thursday.

The match will see the two teams clash for third place and the tournament’s bronze medal, having lost to Bayern Munich and Tigres of Mexico in the semi-finals.

The play-off match between Al Ahly and Palmeiras is the third clash between the Egyptian team against a Brazilian club. The two previous games were in the same tournament, where Al Ahly met with Sport Club Internacional in the semi-finals when the Egyptians lost 0-2. In the second game, they played against Corinthians, also in the semi-final match of the 2012 championship, which Al Ahly lost 1-0.

Before Al Ahly’s defeat against Bayern Munich, it had not lost since August 2020, or in 32 matches, of which it won 25 and tied seven times scoring 60 goals, only conceding 10 goals in all competitions.

Certainly, Al Ahly’s South African coach Pitso Mosimane realises that the team’s preparations against Palmeiras differ from any other confrontation on the technical and mental levels. This is because Al Ahly will not play as it used to, working defensively and besieging the opponent, but will instead work on the offensive, particularly as Palmeiras boast good players in midfield.

Al Ahly’s new attacking midfielder Taher Mohamed Taher has already been able to prove his magic and secure a spot in the main squad. The young player has successfully given a distinguished performance, and written his name in letters of gold during his participation at the FIFA Club World Cup.

In joining Al Ahly’s first team, he fulfilled his childhood dream of one day joining one of Egypt’s most successful clubs.

Taher appeared for the first time at the Touch Stadium last November, following his signing with Al Ahly, and where he gave a distinguished performance.

Despite being unlucky in terms of injuries and international participations, he has now reached the period of his best technical, and has not been affected by his young age, instead putting in a solid performance.

Taher said Al Ahly have a strong match ahead to determine the third place, and he is looking to win the bronze medal to make Al Ahly fans happy.

The 23-year-old succeeded in winning the respect and confidence of the team’s fans, particularly after his steady appearance in the semi-finals of the FIFA Club World Cup. It was the second half, in particular, where he shone, after playing a good match against Bayern Munich, despite the team’s lose.

In press statements before the tournament, Taher talked about the realisation of his life’s dream of playing in the FIFA Club World Cup, after he watched the Red Devils’ matches at the 2005 and 2006 tournaments.