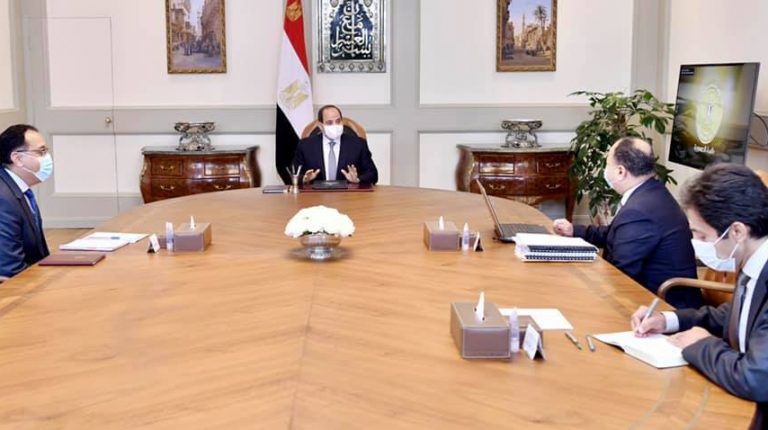 Al-Sisi directed for the government to continuously follow up on and study the impacts of the novel coronavirus (COVID-19) pandemic on the global and regional economic situation.

“The review was undertaken so that the government can take the appropriate financial measures to deal with these challenges, and preserve the gains of economic reforms,” Presidential Spokesperson Bassam Rady said.

During the meeting, Maait presented the financial situation of the state’s general budget during the past seven months. He said that Egypt achieved a primary surplus of EGP 18.1bn during the time period under review, and managed to raise revenues by 16%, while expenditures increased by 12.4%.

Moreover, Egypt’s total budget deficit dropped to 4.4%, from 4.6% during the same period in the last fiscal year (FY), he added. Maait also pointed to the increase in the volume of government investments in different sectors, especially infrastructure and services.

The International Monetary Fund (IMF) raised its growth forecast for Egypt’s economy to 2.8% in the current fiscal year (FY) 2020/21, despite the pandemic. IMF expectations echoed the World Bank’s forecast that the Egyptian economy will grow 2.7% in FY 2020/21.

The Egyptian economy was heavily affected by the pandemic, which took its toll on tourism, and worker remittances. The country’s tourism revenues in 2020 slumped 70% year-on-year (y-o-y) to $4bn due to COVID-19 pandemic, down from $13.03bn in 2019

Rady revealed that the Minister of Finance also showcased the results of the $3.75bn dollar-denominated bond offering in three tranches.

President Al-Sisi directed for the government to expedite the completion of the digitisation process in all the Ministry of Finance’s sectors as planned.

“This will improve the governance of the financial system, including the customs through the application of the prior information system and pre-release to reduce the time of customs clearance and facilitate the movement of trade from and into Egypt,” Al-Sisi added.

The updated system aims to ensure all items in customs are dealt with according to an e-commerce system, with the possibility of pre-clearance and payment of fees before the goods arrive.

The electronic exchange of information and secure data will take place between the Egyptian Customs Authority (ECA) and the state or foreign authorities with whom agreements have been concluded.

In a separate meeting, Al-Sisi organised for the overlap between the Al Awqaf Egyptian Authority and the Agrarian Reform Authority concerning agricultural lands. The meeting was attended by Minister of Agriculture ElSayed ElKosayer and Minister of Religious Endowments Mohamed Mokhtar Gomaa.

During the meeting, the President called for the implementation of modern agriculture methods and irrigation systems nationwide.