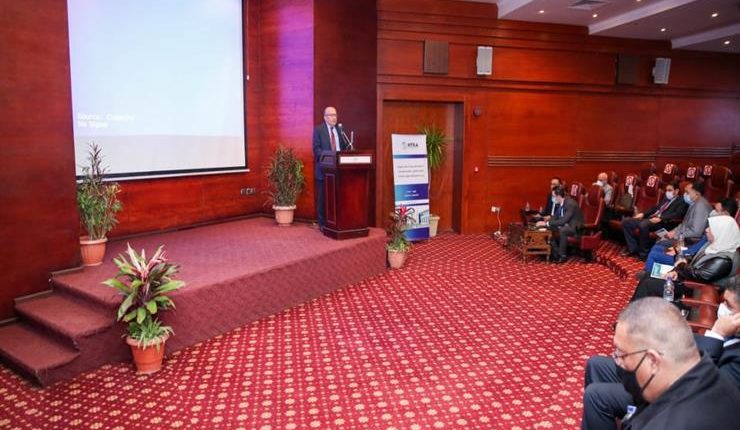 Egypt’s National Telecom Regulatory Authority (NTRA) has organised an introductory seminar for representatives from the Federation of Egyptian Chambers of Commerce (FEDCOC) in Alexandria, Beheira, and Matrouh governorates.

The seminar focused on the tasks and role performed by the authority in controlling and governing the telecommunications market.

Participants in the symposium were representatives and secretaries of all three provinces, as well as heads of chambers of commerce, heads of communications divisions, and more than 50 importers, merchants and sales outlets owners.

The symposium is part of a series of introductory seminars implemented by the NTRA in the various governorates, to clarify and explain the regulatory and governance frameworks in which the agency operates.

This comes particularly in relation to the import and circulation of communications equipment, and the sale and purchase of mobile phone lines, which help to control the mechanisms of work in the Egyptian market.

In a statement, NTRA explained the importance of using its new digital portal, launched at the beginning of this year, for import and licensing services, which works to save effort and time to obtain services. It serves more than 5,000 customers, whether companies or individuals, dealing with all types of communication equipment that cover the needs of the Egyptian market annually.

The services supported by the platform include all procedures related to permits, licences, customs clearance, with obtaining the services of the authority also facilitated electronically.

The symposium dealt with discussion sessions on the topics of cybercrime and its negative effects, as well as the importance of the speedy construction of cell towers. This is driven by their positive impact on the quality and spread of communication services. It also reviewed the system for receiving and resolving users’ complaints, and the development that has been made to ensure complaints are resolved.

NTRA added, during the seminar, that it performs its supervisory and regulatory role to control the market.

It has cooperated with Egypt’s police forces to implement a series of judicial seizures at sales outlets across Egypt. These were carried out to ascertain the outlets’ commitment to the procedures and instructions issued by the agency in the handling of devices that do not conform to the specifications and are not authorised.

These efforts have resulted in the seizure of a large number of communication devices that do not conform to requirements, and which have entered the country illegally.