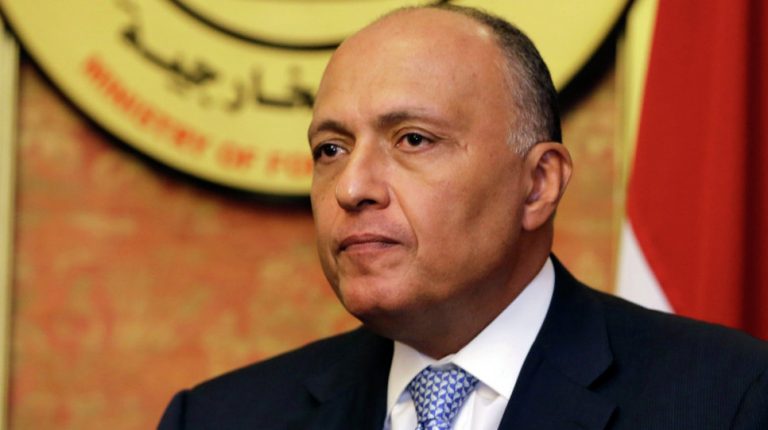 He added that the Egyptian government is also looking to protect the interests of the country and its people, and does not neglect its work on this subject.

As part of this, the minister noted that the government is working, with all its capabilities, to prevent any harm to Egypt and its citizens resulting from the Grand Ethiopian Renaissance Dam (GERD) issue.

In televised statements, Shoukry added that, at this stage, Egypt is looking for a legal and binding agreement on filling and operating the massive Ethiopian dam. This agreement would equally take into account the interests of the three countries currently involved in negotiations and most affected by the dam, Egypt, Sudan, and Ethiopia.

“We seek to achieve [Ethiopia’s] interests in generating electricity, as long as water conservation is taken into consideration,” the minister said, “We are open and do not have any problem.”

He added, “We believe that the Egyptian position bears development since the beginning of the negotiations, as long as there is consideration for common interests.”

Shoukry said that Egypt put forward an objective and fair proposal with plenty of flexibility to reach a conclusion at the beginning of the negotiations. It also affirmed its determination and commitment to reach an agreement in this file.

“We know very well that there are decisive obstacles, and we are aware of the seriousness and the size of the time,” he added, “We have hope that the President of the Democratic Republic of Congo (DRC) will continue negotiations, and we look forward to cooperating with Sudan after the formation of the new government to envision the next steps in this issue.”

Shoukry had earlier confirmed before the House of Representatives that Egypt had actively moved to mobilise international support for its position. The country has also sought to attract the international community’s attention to the risks associated with Ethiopia’s taking unilateral measures in its dealings with the dam. These actions have resulted in referring the file to the United Nations (UN) Security Council for further consideration.

The UN held an unprecedented historic session on 29 June 2020 to discuss this issue, in which the Security Council examined the political and security implications of a water project on a major international river.

The session took place in appreciation of Egypt’s position and its role, and reflected the UN’s consideration of the fairness of the Egyptian vision regarding the dam. It also recognised the danger presented by the dam to security and stability in the entire region.

In the same context, DRC President Felix Tshisekedi pledged that, during his country’s tenure as African Union (AU) President, he would continue to seek a solution to the long-standing dispute over the dam.

Tshisekedi did not specify the approach that the AU intends to adopt regarding the GERD during the DRC’s tenure. This bears in mind that the organisation had previously engaged in unproductive rounds of negotiations, including one that took place last month.

For his part, Ethiopia’s Minister of Water and Irrigation, Seleshi Bekele, held Egypt and Sudan responsible for the failure to reach an agreement in previous negotiations, saying that Addis Ababa is “very flexible” on this score.

“Ethiopia is not concerned with the failure of the parties to reach an agreement on the GERD during the past rounds, which were sponsored by the African Union,” he said.

Sudan has also warned that Ethiopia’s plan to start the second phase of its plan to fill the dam, located on the Blue Nile River, constituted a “direct threat” to its national security.

The Sudanese Minister of Irrigation Yasser Abbas said that his country believes that any unilateral filling of the Ethiopian Renaissance Dam in July of this year will constitute a “direct threat to the Sudanese national security”.

Meanwhile, Sudan’s Prime Minister Abdullah Hamdouk stressed that the GERD poses a threat to the security of about 20 million Sudanese. He pointed out that the solution to the dam issue must be carried out in accordance with international law.