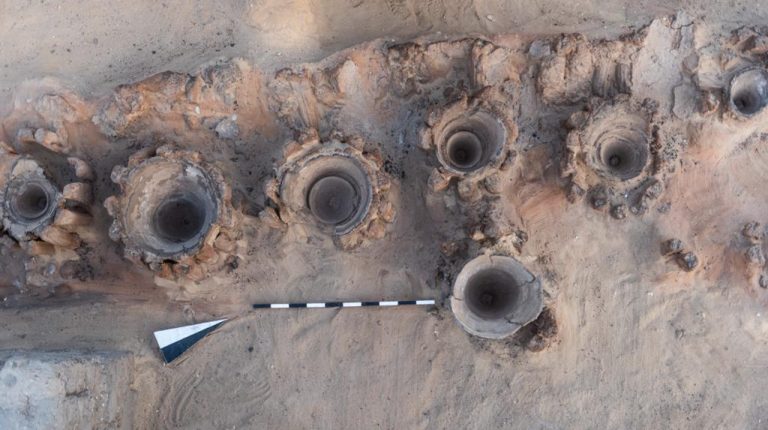 A joint Egyptian-American archaeological mission working in the North Abydos area – Sohag now – has uncovered what is believed to be the oldest mass-production brewery in the world.

Mostafa Waziri, Secretary-General of the Supreme Council of Antiquities, said that the factory is likely to date to the era of King Narmer, and consists of 8 large sections with an area of ​​20 metres length by 2.5 metres width by 0.4 metres depth.

These areas were used as units for beer production, with each sector containing about 40 earthenware ponds or basins arranged in two rows, used to heat the mixture of grains and water. Each basin was held in place by levers made of clay placed vertically in the form of rings.

Mission Head Matthew Adams, of New York University, indicated that studies have proven the factory was producing about 22,400 litres of beer at a time.

He said that it may have been built at this location specifically to supply the royal rituals that were taking place inside the funeral facilities of the kings of Egypt. Evidence for the use of beer in sacrificial rites was found during excavations at these facilities.

It is worth noting that a number of British archaeologists were made aware of the huge brewery at the beginning of the 20th Century, although its location was unknown at the time. The current expedition was able to relocate the site and uncover its contents.

Beer was an exceedingly important commodity in the life of an Ancient Egyptian, a fact little known today.

Research has found that beer was more popular than water, and was even treated as more important than food. The typical everyday meal of Egypt’s ancient ancestors consisted of bread, beer, onions, and some fish.

All social categories enjoyed drinking beer, and, unlike its modern forms, was not just a drink for men, as women and children also drank it in Ancient Egyptian times. It was also consumed both on a daily basis and in great quantities at religious festivals and celebrations.

Offerings of beer were presented to gods, and beer was mentioned in the traditional offering formula. Workers also were interested in beer to the extent that wages were often paid in beer and other supplies.

Beer was the staple drink for poor Egyptians, but was also central to the diet of wealthy Egyptians. And despite the drink being so important to everyday life, the ancients were not rolling around drunk all day, primarily because Ancient Egyptian beer was not particularly intoxicating. Instead, it was more a thick, sweet, and nutritious drink that complemented the diet.

According to theories put forward by prominent anthropologist Solomon Katz, when man learned to ferment grain into beer more than 10,000 years ago, it became one of his most important sources of nutrition. Beer gave people protein that unfermented grain could not supply, whilst also tasting a lot better.

The British Museum mentioned in a blog that the Ancient Egyptians that built the Pyramids of Giza were provided with a daily ration of 1⅓ gallons (over 10 pints).

Records of payment through beer at various sites throughout Egypt, in fact, provides best evidence that the pyramids were not built by slaves but by paid Egyptian labour.

The question that may come to your mind while reading this, is what techniques were used in Ancient Egypt to make beer.

The most popular beer in Egypt was called Heqet (or Hecht), which was a honey-flavoured brew. Studies reveal that the Ancient Egyptians knew many types of beer, most of which were made from barley, whilst others were made from emmer wheat, and many were flavoured with honey or ginger.

According to the Ancient History Encyclopaedia, beer around the time of the Old Kingdom of Egypt was brewed by mixing cooked loaves of bread in water and placing the mixture in heated jars to ferment.

The use of hops was unknown to the Egyptians, as was the process of carbonation. To a modern-day beer drinker, an Egyptian brew would taste more like a fruit drink than the familiar beverage we are used to now.

Dates and honey were added for sugary taste, and higher alcohol content, and then yeast in order to increase fermentation. This beer was a thick, dark red brew which perhaps suggested beer originally dyed by Ra to calm and transform Sekhmet.

By the time of the New Kingdom, barley and emmer (wheat) were used which were mixed with water to create a mash which was then poured into vats and heated to ferment. This mixture was then strained, and different herbs and fruits added for the flavouring of the various types of beer.

Egyptologist Helen Strudwick wrote in her book The Encyclopaedia of Ancient Egypt, “Fermentation of everyday beer took a few days, producing a mixture fairly low in alcohol but with an outcome that was a thick, brothy liquid that had to be filtered through a basket before being drunk.”

She added that, once strained, beer was sealed in ceramic jugs and stored, often underground in a process similar to later lagering.

In the New Kingdom, when emmer and barley were used, the use of dates and honey decreased in the production of common beer and were only used for higher quality brews for special occasions.

Beer with high alcohol content was favoured for banquets and festivals and, in fact, a party was rated a success depending on the level of the participants’ intoxication and the amount of beer consumed.

The highest quality beer, of course, was brewed for the king and the nobility and flavoured with honey which was associated with the gods. Beer found in the tomb of the pharaoh Tutankhamun, for example, was honey beer similar to the later European mead.

Although it is known that beer is the oldest recorded recipe in the world, the lingering question has always focused on who invented it.

In addition to the archaeological discoveries, much research has been conducted to prove that beer production dates back to the Ancient Egyptians, the first to document the brewing process on papyrus scrolls around 5000 BCE.

The archaeological record indicates that beer production dates back before the pharaonic period, to the pre-dynastic period between 4000-3100 BCE, also known as the formative stage of the Egyptian civilisation.

Heating installations related to beer production involving large ceramic vats (serving as mashtuns) have been reported at several sites from this era, with a significant number excavated at the major population centre of ancient Hierakonpolis.

Hierakonpolis is located on the west bank of the Nile, 17 km north of the modern town of Edfu in Upper Egypt.