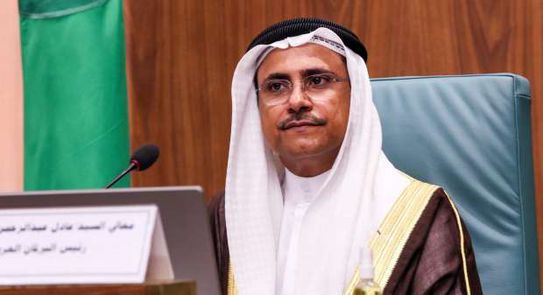 Al-Asoumi also condemned the group’s issuance of death sentences against 11 members of the House of Representatives, after show trials that had no legal basis.

In a statement on Monday, he highlighted the crimes and violations by the terrorist militia against members of the Yemeni Parliament. He also emphasised the group’s continuous attacks on civilians in the Ma’rib Governorate, which is home to more than a million displaced persons.

This was in addition to the Houthi’s bombing of residential neighbourhoods with rockets, booby-traps, and other violations.

Al-Asoumi noted that these actions reaffirm the militia’s insistence on thwarting all regional and international efforts aimed at appeasement and reaching a political solution to the Yemeni crisis. He said that these activities carried out by the group reflects its extreme contempt for all international laws and norms.

The Arab Parliament President called on the international community, especially the UN Security Council and the Inter-Parliamentary Union, as well as all parliamentary organisations and unions, to take a unified position to support the legitimate Yemeni parliament.

This should also see these entities adopt deterrent measures to stop the continuing violations by the terrorist Houthi militia against the Yemeni people and their elected representatives.

Al-Asoumi warned that in the absence of such deterrent measures, the militia will continue to commit its terrorist crimes and continuous violations against civilians.