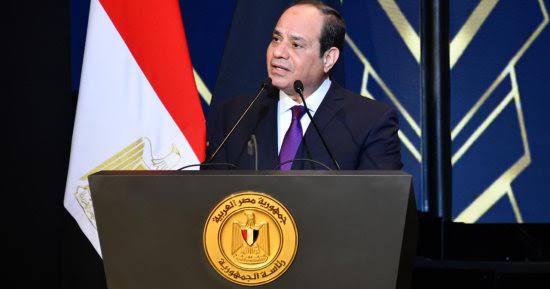 He also said that the rate of population growth should be proportional with the resources available in Egypt, explaining that this growth negatively affects all sectors.

The President’s remarks came during the inauguration of a number of medical establishments. During the event, he stressed that citizens will not feel the impact of public spending on national projects and infrastructure unless annual population growth is cut to 400,000 people from the current 2.4 million.

“We accept the opposition’s scientific criticisms for the national action to uncover and solve the negatives,” Al-Sisi said.

He added that the government is serious about counteracting the challenges the country faces, as it is the role of the government to improve the living conditions of citizens.

The president directed his speech to the citizens saying, “Didn’t you do a revolution in 2011 for a better life? It won’t happen with a population crisis.”

He added that “overpopulation is a national security matter”, and the security and stability of the state is linked to reducing the population increase.

“Why would you give birth to a child you are not able to feed and do not know how they would be employed? The outcome is 50% living in slums and building residences on agricultural land depleting our source of food,” the president said, “You overwhelm yourself and the state, then you revolt and the series of destruction goes on.”

Moreover, Minister of Planning and Economic Cooperation Hala El-Said pointed out that the “number of students in Egypt will reach 44 million in 2052 up from the current 22 million, if the same rate of population growth continues. That would require the increase of the current capacity of classrooms and teachers by four times.”

The minister added that the ideal Egypt must reach is 1.9 children per woman, asserting that in 2020, Egypt recorded 2.35 million births, or 270 new births per hour.

El-Said affirmed that with controlling population growth rates, the government can achieve better education and health care systems. She noted that population growth is the biggest challenge to development, and as a result the whole country is working on the Egyptian family development plan.

She said that Egypt used to record a population increase of 20 million citizens in 28 years, but has recorded the same increase during the last eight years.

Furthermore, Minister of Social Solidarity Nevine El-Kabbaj asserted that her ministry has a complete database used for targeting families in awareness campaigns and social protection programmes.

She indicated that there are 108 civil society organisations cooperating with her ministry in the family planning campaign “Two are Enough”. Meanwhile, she explained that her ministry had deployed volunteers in 1,000 youth centres, 17,000 schools, and 14 universities to spread awareness campaigns against addiction.

El-Kabbaj confirmed that 400,000 citizens have benefited from addiction treatment services within the past three years, indicating that her ministry had tested about 300,000 employees for drug abuse.