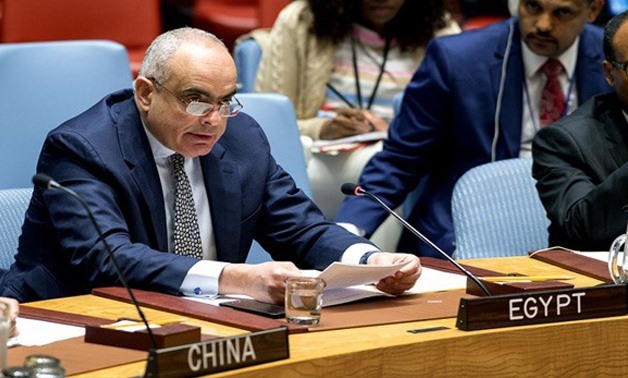 The United Nations (UN) Special Committee for Peacekeeping Operations opened its 2021 session, on Monday, by re-electing Egypt as Rapporteur for the Committee’s work.

Ambassador Mohamed Idris, Egypt’s permanent representative to the UN, stated that his country’s re-election reflects Egypt’s active role in peacekeeping, both in terms of the size of its military and police contributions.

The re-election reflects Egypt’s position as seventh major troop-contributing country in terms of UN peacekeeping operations, and highlights its contribution in developing concepts and policies of peacekeeping.

In Egypt’s statement to the committee, Ambassador Idris highlighted the importance of the peacekeepers’ role, and applauded their sacrifices during their work.

He also saluted those peace-keeping troops who have died whilst performing their roles, and said that their memory will never be forgotten.

Idris expressed concern on the recent increase in the number of victims among UN peacekeepers as a result of hostilities. He highlighted the need to make all possible efforts to ensure adequate security for peacekeepers, as well as to hold the perpetrators of those acts accountable.

The Ambassador also noted the repercussions of the novel coronavirus (COVID-19 pandemic), which has affected peacekeeping operations, and exacerbated the difficulties and complexities of peacekeeping environments.

He praised the UN’s efforts in combating the pandemic, its effective response to new infections, and its contributions to limiting injuries in the field. He noted the importance of the ongoing consultations on vaccinating peacekeepers against COVID-19, pointing to the need to ensure rapid, fair, and equitable access to the vaccine for the benefit of all peacekeepers without discrimination.

Idris also presented the Egyptian priorities, which include strengthening the security and safety of peacekeepers, and enhancing interdependence and integration between peacekeeping and peacebuilding.

This particularly comes in light of Egypt’s current presidency of the UN Peacebuilding Commission, and supporting a comprehensive approach to developing the performance of peacekeeping operations. It comes in accordance with the vision contained in the Cairo Road Map.

The Road Map emphasises the priority of political solutions to conflicts and the need for peace-keeping operations to adopt clear and time-bound political strategies. At the same time, it looks to increase women’s participation in peacekeeping, and deepen the partnership between the UN and the African Union in peacekeeping.