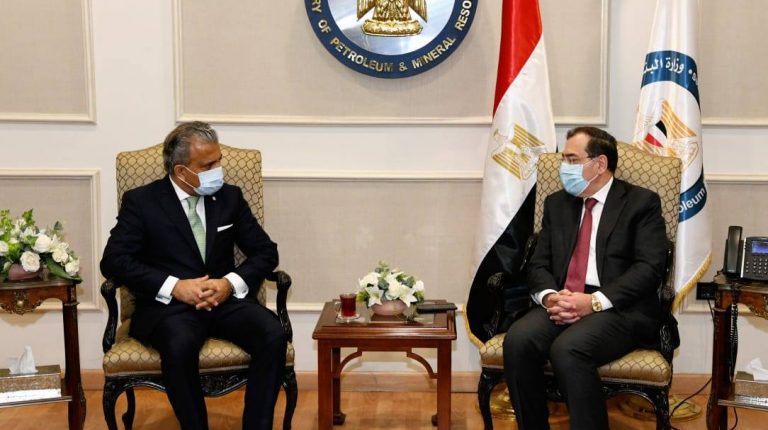 The two parties discussed the current position of joint cooperation projects in Egypt, and reviewed developments in global oil and gas prices. This particularly focused on the current challenges posed by the novel coronavirus (COVID-19) pandemic on global markets.

El Molla emphasised that the oil sector enjoys many distinguished partnerships with foreign companies, including BP, which is one of the most important strategic partners in the sector.

He noted that there are many areas and opportunities through which this strategic cooperation can be supported.

The minister added that petroleum agreements signed recently with a number of major international companies aim to push businesses in Egypt’s petroleum sector. They also seek to speed up the addition of new reserves to Egypt’s oil wealth.

“The Eastern Mediterranean Gas Forum provides great economic benefits to all member states, not just Egypt, as it will facilitate companies businesses in Eastern Mediterranean region,” El Molla said, “Egypt is committed to international agreements seeking to preserve climate and environment and is currently working on expanding using natural gas in many activities, due to its environmentally friendly properties, whether in cars supply of and delivery to homes or in providing the needs of major projects that are implemented throughout Egypt.”

For his part, BP’s Dev Sanyal affirmed that the company has great confidence in Egypt’s investment-attracting climate, and looks to the future of its business in the country with a positive and optimistic view.

Sanyal added that PB considers Egypt one of the most important stations in the company’s businesses at the global level. It aspires to increase its activities in many other areas, especially in the gas trade, in addition to trading petroleum products through its other subsidiary companies.

During the talks, Birrell reviewed the latest developments in the executive position at the Raven field, which forms part of  the third phase of the West Nile Delta development project in the Mediterranean Sea.

Birrell revealed that the Raven field is about to start production in the coming period, and noted BP’s commitment to providing investments. Part of the company’s focus is on research and exploration activities relating to oil and gas, especially in deep waters.