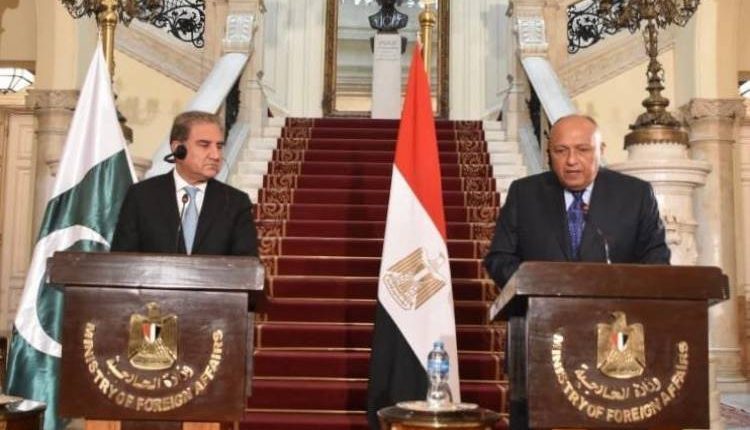 Egypt’s Minister of Foreign Affairs Sameh Shoukry has emphasised that there is a history of mutual solidarity between Egypt and Pakistan.

Shoukry added that Pakistan has always taken a supportive stance on Arab issues and issues related to Egypt, and that Egypt is one of the forefront of countries dealing with the south Asian country.

Shoukry also said that Egypt is working to strengthen relations with Pakistan in all areas of cooperation.

In a press conference with his Pakistani counterpart Shah Mahmoud Qureshi, Shoukry said that the bilateral talks discussed expanding cooperation in a way that serves developmental interests in the two countries.

This takes into account the special relationship linking the two countries, with Shoukry pointing to the existence of a common political will between Cairo and Islamabad to strengthen bilateral relations.

The countries are also looking to resume the pace of relations in all relations. The Egyptian Foreign Minister added that his Pakistani counterpart met, on Wednesday morning, with President Abdel Fattah Al-Sisi.

Shoukry indicated that he spoke with the Pakistani delegation on restoring areas of cooperation through successive rounds of meetings at the senior officials and ministerial levels.

The Egyptian minister also held a joint ministerial committee, adding that efforts are underway to restore the special relationship between the two countries and to expand their mutual development interests.

For his part, Minister Qureshi said that the joint political relations between Egypt and Pakistan are excellent, and thanked Egypt for its position in supporting Islamabad to obtain a seat in the Security Council.

The minister confirmed the existence of a roadmap to strengthen cooperation with Egypt and intensify meetings to hold the joint committee, referring to his country’s desire to enhance memoranda of understanding between Egypt and Pakistan.

Qureshi thanked President Al-Sisi for his support to Pakistan and all developing countries.

Egypt has no ambitions in Libya, only seeks neighbour’s stability: Shoukry