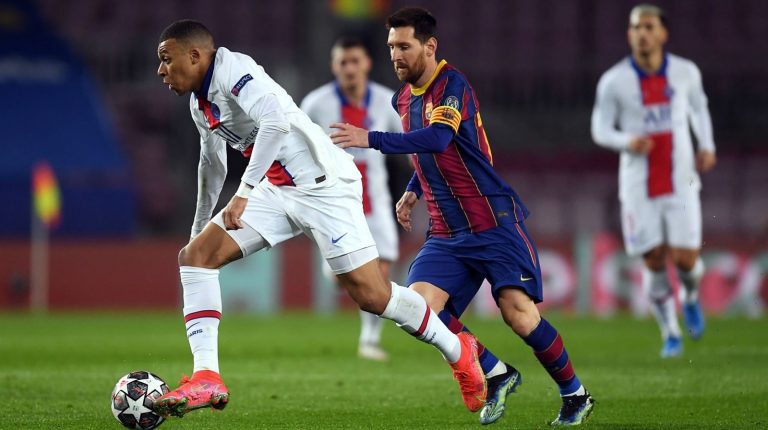 The match, which took place at the Camp Nou on Tuesday evening, ended in the Parisian team’s favour in a 4-1 win. The match was the first leg of the last 16 round of the UEFA Champions League for the current season 2020-2021.

Mbappé scored a hat-trick against Barcelona in the 32nd, 65th and 85th minutes of the match. Italian striker Moise Kean also scored a goal, bringing PSG closer to qualifying for the quarter-finals. They still have to face the Spanish side in the second leg match, scheduled for 10 March at the Princes Park stadium in the French capital.

Argentine star Lionel Messi scored Barcelona’s only goal in the match from the spot in the 27th minute of the match.

The match witnessed many records, led by Mbappé, which came as follows:

1- Mbappé is the third highest French goal-scorer in the knockout stages of Champions League, with 10 goals, behind Karim Benzema (18) and Thierry Henry (12).

2- Mbappé is the first player to score a hat-trick against Barcelona in the Champions League knockout stages.

3- He is also the second player in Champions League history to score a hat-trick against Barcelona at the Camp Nou stadium, after Andriy Shevchenko in 1997 with Dynamo Kiev.

4- Mbappé became the third all-time goal scorer for the Parisian team with 111 goals, behind Edinson Cavani’s 200 goals and Zlatan Ibrahimovic’s 156.

6 – Paris Saint-Germain is the first French team to win against Barcelona at Camp Nou in the Champions League.