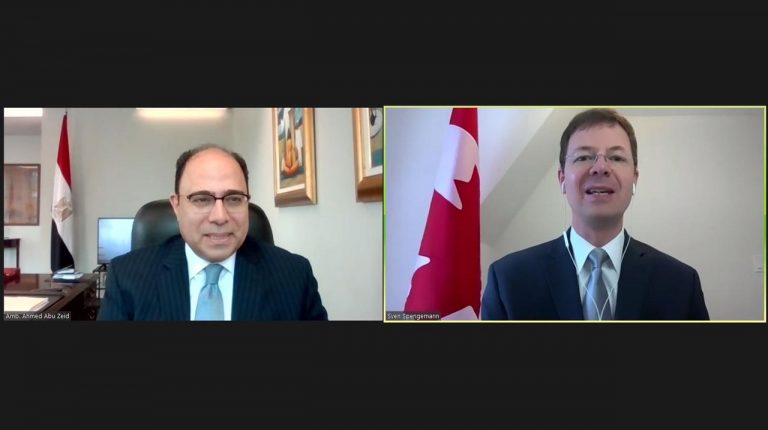 The ambassador is constantly seeking to strengthen Egyptian-Canadian bilateral relations in all fields, and explain the Egyptian vision towards the issues of the region. Spengemann serves as head of the Foreign Affairs and International Development Committee in the Canadian House of Commons.

Following the meeting, Abu Zeid said that he is keen to communicate with MPs from Canada’s two chambers, to explain the developments that Egypt is witnessing in all sectors.

These bilateral communications also seek to discuss ways to strengthen Egyptian-Canadian relations in a way that benefits the common interest of the two countries and their peoples.

The Egyptian Ambassador added that the meeting with Spengemann is of special importance for two reasons, the first being due to the latter’s role.

The Foreign Relations Committee in Canada’s House of Commons is concerned with following up on Canada’s foreign relations. It also has a great impact on the Canadian government’s stance towards international issues.

Spengemann is also a member of the Canada-Egypt Parliamentary Friendship Group, and was recently elected CEO of the group. This reflects the special relationship that binds the representative, who belongs to the ruling Canadian Liberal Party, with Egypt.

During the meeting, Abu Zeid reviewed the course of relations between the two countries over the past few years. The relations have gained momentum through the important meeting that brought together the Canadian Prime Minister Justin Trudeau and Egypt’s President Abdel Fattah Al-Sisi, on the sidelines of the African Union summit last year in Ethiopia.

It has also been boosted by other joint meetings, including the tenth round of political consultations held between the Ministries of Foreign Affairs from both countries last October.

This comes in addition to the formation of the Canada-Egypt Parliamentary Friendship Group, and the boom in trade and economic relations, according to which Egypt became Canada’s first trade partner in Africa.

Abu Zeid was keen to answer the committee’s enquiries regarding Egypt’s assessment of the situation in Libya and Sudan, the developments in the Grand Ethiopian Renaissance Dam (GERD) negotiations, and efforts to combat terrorism.

He was also keen to discuss the prospects for development and technical cooperation between Egypt and Canada in the African arena.

Ambassador Abu Zeid concluded his remarks by noting that the next phase will witness more interaction and cooperation at the parliamentary level between the two countries.

He revealed that he has invited Spengemann to visit Egypt at the head of a delegation of the committee members as soon as possible after the end of the precautionary measures related to the novel coronavirus (COVID-19) pandemic.