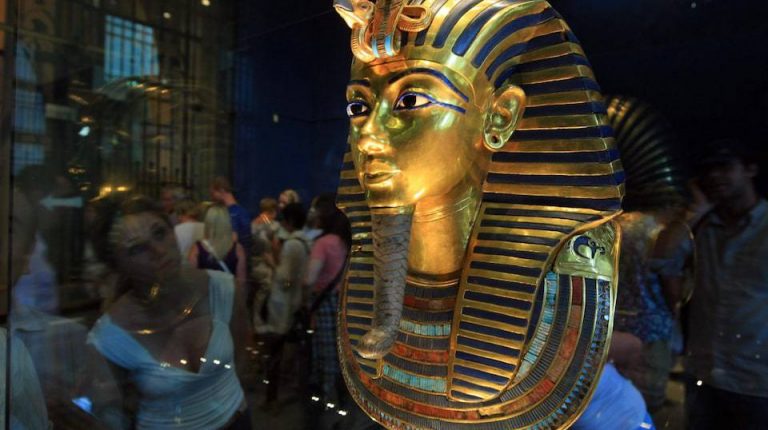 British newspaper The Telegraph has published a report on tourism in Egypt, showcasing the Pharaoh Tutankhamun’s funerary mask as one of the world tourist icons that must be seen during one’s lifetime.

Egypt launched in 2019 a world tour for 150 precious artefacts from King Tutankhamun’s tomb. The United Kingdom was the third stop in the tour, hosting a temporary exhibition starting from November 2019. The tour was scheduled to last until the end of 2022.

As a result of the current global health and associated restrictions around the world, the much hyped world tour has come to an end. On 28 August 2020, the artefacts that made up the temporary exhibition returned to Cairo. The collection is set for permanent display at the Grand Egyptian Museum which is currently under construction

Tutankhamun, sometimes called the Boy Pharaoh due to his young age at taking the throne and his equally young death, ruled from 1333 BCE until his death in 1323 BCE. The discovery of his largely intact tomb in 1922, by British archaeologist Howard Carter, is considered one of the most significant archaeological discoveries in the modern era.

Tutankhamun’s gold mask is probably the most famous artefact ever found in Egypt. The British archaeologist Howard Carter described it as ‘a beautiful and unique specimen of ancient portraiture’. He also noted that it ‘bears a sad but calm expression suggestive of youth prematurely overtaken by death’.

The 10kg mask is one of the best-known works of art in the world, and is a marvel of skilled craftsmanship. It is made of a layer of pure gold inlaid with glass, as well as precious and semi-precious jewels.

The stripes on the headdress are glass, with the eyeliner and eyebrows made of lapis lazuli, one of the Ancient Egyptians’ favourite stones. The eyes themselves are of obsidian (black volcanic glass) and quartz.

The mask is not only an excellent example of ancient craftsmanship, but it also shows just how much international trade was going on even in ancient times, as lapis lazuli had to be imported from Afghanistan.

This report is the third to be published by The Telegraph reporting on tourism in Egypt. Previous articles have included a report which chose Egypt as one of the best destinations of 2021 after the UK’s lockdown eases.

The second was about River Nile cruises in Egypt, with the article describing them as one of the best cruise experiences in the world.