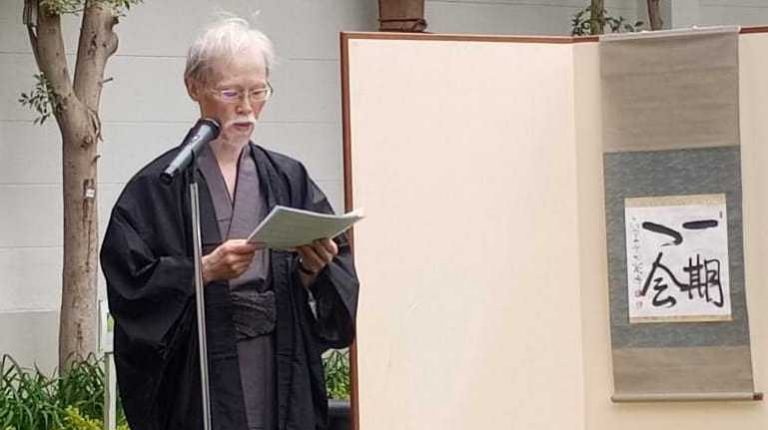 Japan’s Ambassador to Egypt, Noke Masaki, held a traditional tea ceremony, the first this year, on Saturday, whilst taking all the precautionary measures.

The tea ceremony was held in the open air due to the novel coronavirus (COVID-19) pandemic. The event, at which all invited guests were female, was attended by Egyptian women leaders including: Second Deputy Speaker in Egypt’s Senate, Feby Fawzy; Hayat Khattab, President of the Egyptian Paralympic Committee at the Senate; Ghada Shalaby, Deputy Minister of Tourism and Antiquities; Mona Ahmad, First Undersecretary at the Ministry of International Cooperation; Salwa Rashad, Dean of the Faculty of Alsun; Ain Shams University; as well as other female leaders.

“Today we invited the female friends of Japan who are Egyptian women and leaders in various fields,” the Ambassador said, “This is in order to create a “society in which women shine”, which is one of the directions of the Japanese government, and also to thank and support women who play an important role in light of the coronavirus crisis.”

He narrated that the tea ceremony was restricted to warriors during the Sengoku period in the 13th Century. It then spread among the common people during the Edo era in the 18th Century. Meanwhile, in the 20th Century, the number of practitioners tended to be women more than men.

“The tea ceremony may appear to be just a ritual, but in fact, it contains feelings of respect and sympathy towards the guests,” the Ambassador said, “Because of COVID-19, everyone was forced to change their lifestyles, and there were restrictions on linking with family, relatives and friends, and here the importance of the tea ceremony appears, which is compassion and sympathy among people.”

Deputy Minister Shalaby proposed cooperation with the Japanese Foundation in Egypt to create a tourism promotion programme that includes Japanese customs and traditions, including tea rituals. This will be placed on the Ministry of Tourism and Antiquities plan to promote Japanese tourism in Egypt.

Tarek El-Sayed, Head of the Urasenke Tankokai Egypt Association, welcomed the idea, noting that he hopes to implement the Japanese tea rituals at the foot of the pyramid after the coronavirus crisis.