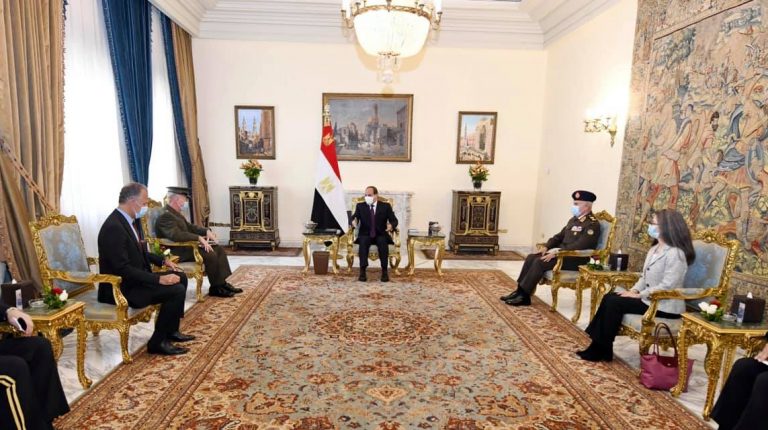 Mohamed Farid, Chief-of-Staff of the Egyptian Armed Forces, and Jonathan Cohen, US Ambassador in Cairo, attended the meeting, which also discussed issues of mutual concern between Egypt and the US.

President Al-Sisi welcomed McKenzie on his visit to Egypt, and stressed the particularity of the established strategic relations between Egypt and the US. He affirmed that Egypt is looking forward to the continued development of existing bilateral cooperation in all fields.

For his part, McKenzie noted his keenness to continue the pace of coordination and joint consultation with Egypt regarding regional issues. These aim to help strengthen the military relations between Egypt and the US, the Presidency statement added.

He further described the relationship between the two sides as essential to facing the current challenges that threaten the security and stability of the Middle East, taking into account the pivotal Egyptian role in supporting peace and stability in its regional environment.

Rady said that the meeting dealt with ways to strengthen bilateral cooperation between the two countries on the military, security and counterterrorism levels.

Moreover, the meeting addressed the joint training programmes and exchange of experiences, views and visions on the latest developments on several regional issues. These relate particularly to the Middle East, the Horn of Africa, and the eastern Mediterranean.

The two sides agreed to continue regular bilateral consultations and coordination between the two countries regarding issues of common interest.