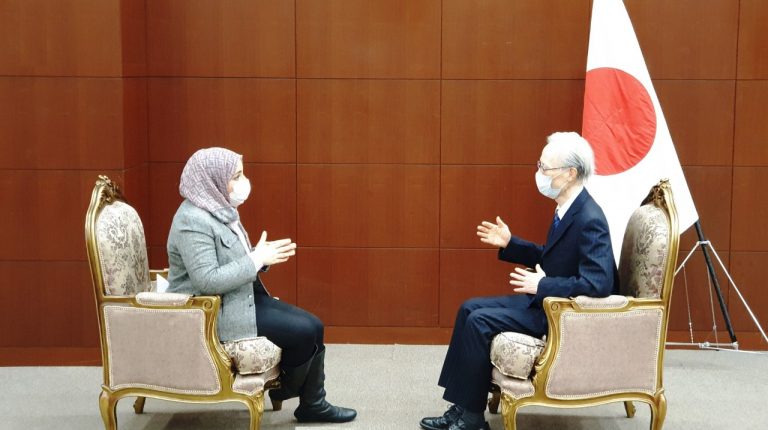 The future of the bilateral relations between Egypt and Japan is full of possibilities, according to Noke Masaki, Ambassador of Japan to Egypt.

Speaking to Daily News Egypt, Noke said that Egypt’s fundamental importance stems from its geographical location, and positive role in the peace and stability of the Middle East region.

He also noted that Egypt serves as a regional hub in energy and other areas, and, above all, as a dynamic economy and society with young Egyptians who are Japan’s friends.

“It is increasing its importance for a “Free and Open Indo-Pacific (FOIP)” that Japan is pursuing with a view to realising global prosperity through enhanced connectivity,” the Ambassador said, “Japan will continue to work hand-in-hand with Egypt in the bilateral context as well as for the peace and prosperity in the region and the world, in order to create our better future.”

Japan celebrates the Emperor’s Birthday on Tuesday. On the occasion, Daily News Egypt sat down for an interview with Ambassador Noke, to discuss all aspects of the bilateral relations between Egypt and Japan.

During the interview, the ambassador touched on the two major and hotly anticipated world events which are set to take place in the near future, namely the opening of the Grand Egyptian Museum (GEM), and the Olympic and Paralympic Games in Tokyo 2020.

How do you view the relations between the two countries, and how can both countries benefit from each other?

We are pleased to share our joy with our Egyptian friends on the occasion of the birthday of His Majesty the Emperor on 23 February. Exactly 100 years ago, his grandfather Emperor Showa, who was Crown Prince at that time, visited Egypt on his way to Europe, seeing the Pyramids and meeting with King Fuad I. Japan’s first diplomatic mission opened in Cairo 85 years ago.

Our historical friendship is embodied by symbolic projects: the Cairo Opera House, Abu El-Rish Hospital, the El Salam Bridge, the Cairo Metro, the Borg El-Arab Airport, Dairut Regulators, Wind Power Plants in Zafarana and Gulf Al-Zayt, the Egyptian-Japanese Schools (EJS), the Egypt-Japan University of Science and Technology (E-JUST), as well as the GEM, and the like.

There has been a boost in such ties under Egypt’s President Abdel Fattah Al-Sisi through cordial relations with our former Prime Minister Shinzo Abe. Further development is on the move under our current Prime Minister Yoshihide Suga.

There is ample room for cooperation between Egypt and Japan, key countries in their respective regions. We would like to see, in particular, a Free and Open Indo-Pacific (FOIP), with international order based on the rule of law, economic prosperity through enhanced connectivity, and peace and stability.

Could you brief us on the two major world anticipated events, the opening of the GEM, and the Olympic and Paralympic Games Tokyo 2020? Also, What files are you giving priority to, and what cooperation files need to be enhanced?

In addition to the 85th anniversary of our diplomatic relations, two major events are in our schedule: the opening of the GEM, and the Olympic and Paralympic Games Tokyo 2020.

The GEM will open after long years of our close cooperation, involving the equivalent of $800m in loans, technical cooperation for conservation, and also restoration of the second solar boat belonging to the Pharaoh Khufu.

The 2020 Olympic and Paralympic Games in Tokyo  are scheduled to start from 23 July. All parties involved are working together for a safe and secure Games, hoping to make it a proof that humanity has defeated the novel coronavirus (COVID-19) pandemic.

Taking advantage of these auspicious opportunities, we will work closely with our Egyptian colleagues in political, economic, as well as cultural areas.

What do you think of Egypt’s economic performance especially amid the pandemic? Also, what is your evaluation of Egypt’s investment climate?

Egypt’s economic growth during the pandemic, which stood at 3.6% for fiscal year (FY) 2019/20, is one of the best in the region, and I believe it owes a lot to its serious reform efforts and timely response to the crisis. Of course, everybody in the world is facing challenges in their daily life, but I see many positive moves from the government and the society.

The investment climate here is fundamentally promising, thanks to its young and dynamic population and geographical position, and as the world, including Egypt and Japan, overcomes the current crisis, investment will be reanimated.

What was the trade exchange value between Egypt and Japan during 2020? And what are the expectations or the target by the end of the current year?

This positive trend is encouraging. Let me note that these figures do not still match the potential of our economies, and ignore voluminous exchanges with Egypt through global Japanese companies located in Asia and Europe. Anyway, we expect additional trade growth when the coronavirus crisis is over and the world economy recovers.

What is the value of Japanese investments in Egypt, and in what sectors? To date, how many Japanese companies are operating in Egypt? How many direct job opportunities they provide.

Japan’s new direct investment to Egypt in FY 2019/2020 amounted to $33m, an increase of 30.4% from the previous year. The total investment exceeds $938m. Just like in trade, there is a lot of uncounted investment from Japanese companies in Asia and Europe, such as SEWS (Sumitomo Electric Wiring Systems) from the UK.

Toyota’s Fortuner is manufactured by an Egyptian contractor, which provides about 600 jobs. It is worthwhile to mention that these Japanese manufactures have strong business ties with Egyptian local manufactures, creating many indirect job opportunities for Egyptians.

The economic recovery in Egypt, Japan, and the world is naturally desirable for greater investment in Egypt, but the industrial policy equally holds the key. For example, Japanese automakers have to choose whether to invest and produce in Egypt, or export to Egypt from Egypt’s free trade agreement partners. A clear automobile industry policy will encourage local production.

It is too pretentious for me to make any recommendation, but if I may say something about Japanese businessmen, they decide on investment through long-term view, valuing quality and trust.

We often say, “Buy cheap and waste your money”. If a product is twice durable, you should pay double. You should also take into account maintenance cost and after-services. So, focus on the life-cycle cost.

If you trust your business partner, you can find a solution together, and save costs in the end. Do not be misled by face value or initial cost, and avoid to be lost in a price bargain.

Japanese people are often said to be rather slow in decision-making because of meticulous preparations, but fast and consistent, once trust is built and decision taken.

What sector represents the largest share of JICA’s portfolio in Egypt? What are the current projects in this field and what are the future plans?

A total of 32% of the Japan International Cooperation Agency’s (JICA) ODA loans have been directed to the power sector, for 20 projects with a total value of $2.42bn. The rehabilitation and improvement of the electricity sector including the rehabilitation of the Cairo North Power Plant, and the construction of Zafarana Wind Power Plant and Gulf Al-Zayt Wind Power Plant are some examples, and there will be new projects in the wind and solar energy sectors. On 15 February, I signed a new agreement on providing $240m in support for Egypt’s power sector reform.

It is important for a “Free and Open Indo-Pacific” to see Egypt, at the crossroads between the Middle East, Africa and Europe, develop as a regional energy hub and promote stability in the region and the world.

Is it true that Japan and Egypt held discussions for the former to take a role in managing the GEM?

Japan is honoured to be part of the GEM project, through the equivalent of $800m in loans, as well as providing technical cooperation for the preservation and restoration of relics. This comes in addition to Japan’s part in the restoration of the Second Solar Boat of the Pharaoh Khufu, whose excavation has just finished. The boat is set to be exhibited on the GEM premise.

Besides this, we are currently coordinating with the Egyptian Government on technical cooperation in the area of management. We hope to maintain our good relations with the museum, as a symbol of cooperation between Japan and Egypt.

How many Japanese tourists do you expect to visit Egypt in 2021?

We love Ancient Egypt. Even now, the Edo-Tokyo Museum is successfully holding the exhibition “Ancient Egypt—The Creation of the World”. I cannot predict how many, but certainly many tourists will return to Egypt, after the COVID-19 crisis comes to an end, and especially after the opening of the GEM.

GLOBALink | Over 150 injured in 7.3-magnitude quake in northeastern Japan