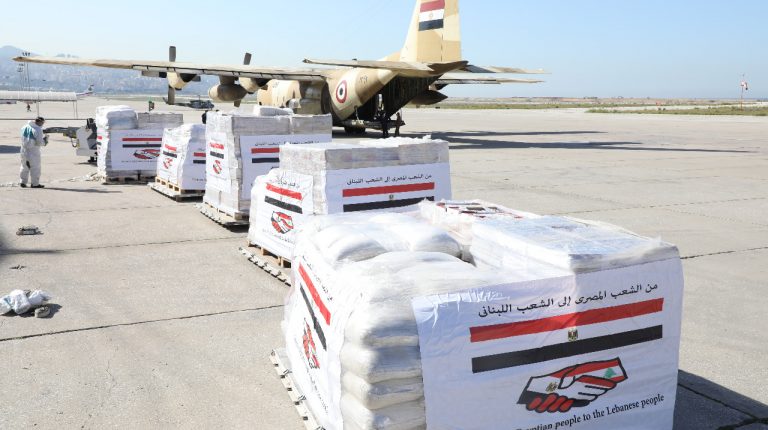 The latest in a series of Egypt’s humanitarian air bridge flights to Lebanon arrived in Beirut’s Rafic Hariri International Airport, on Thursday, to reinforce the country’s novel coronavirus (COVID-19) response, the Egyptian Embassy in Lebanon announced.

Since August 2020, Egypt has set up an air bridge operation to provide humanitarian assistance to Lebanon, with several medical teams sent to assist in providing medical aid at Egypt’s field hospital in Beirut. The assistance comes upon the Egyptian President’s directives to support the Lebanese people following a huge and deadly blast at Beirut’s port last year.

Upon the emergency shipment arrival, Lebanese Minister of National Defense, Zeina Akar, extended her appreciation to Egyptian President Abdel Fattah Al-Sisi and Prime Minister Mostafa Madbouly for their support to Lebanon since the Beirut port crisis.

“On behalf of the Lebanese government and the Lebanese army, we thank the Egyptian President Al-Sisi,” she said, “Medical and humanitarian aid Egypt has been sending to Lebanon since the Beirut explosion on 4 August 2020, extremely eased people’s pain, especially in these difficult times in which we live.”

Egyptian Ambassador to Lebanon, Yasser Elwi, said that this batch was specifically provided to the Lebanese army to support its key role in maintaining stability in the country. He added that the latest shipment comprised of 10 tonnes of medical supplies and medicine, and 5 tonnes of food.