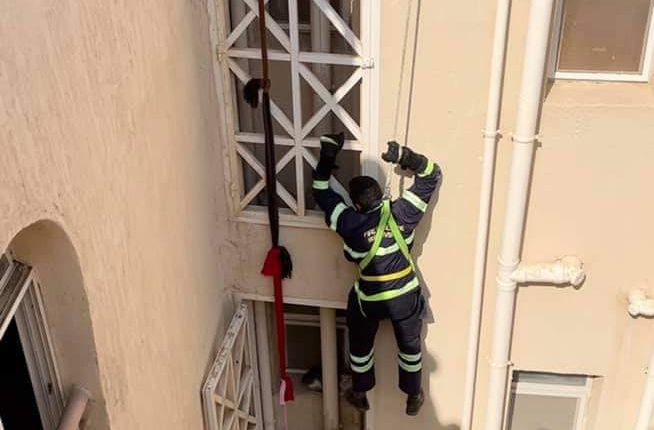 Talaat Moustafa Group (TMG) is keen to provide all services in Al-Rehab and Madinaty to deal with emergencies. The administration of the two cities, which are located in east-Cairo is affiliated with the TMG CEO Hisham Talaat Mostafa, constantly work to ensure the safety of their residents.

Over the past few days, civil protection in Al-Rehab and Madinaty rescued several cats which have been stuck in balconies or building facades for days. The crew was able to save the cats from situations that could have lead to their death, especially with the low temperatures and staying without food or water for days.

One of the Madinaty residents called the city’s firefighters department to rescue a cat stuck in a building on the fifth floor. The firefighters unit responded and the cat was rescued after it was stuck for days after all attempts by the residents to rescue it failed.

The same situation was repeated in Al-Rehab in Group 67, where a cat was stuck in the balcony of one of the closed apartments, but the Al-Rehab firefighters department did not rest until after it rescued the cat and safely removed it from the balcony.

Residents of ِAl-Rehab and Madinaty praised the quick response of the fire departments to their calls, even if they were to save cats, setting an example in taking humane and noble stances to preserve the lives of animals.