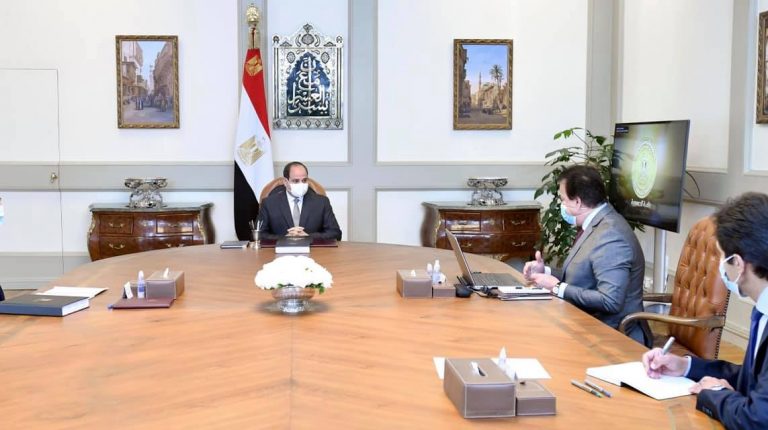 The meeting reviewed the establishment of the Egyptian Genome Center, which aims to prepare a map of the Egyptian human genome. The centre also seeks to discover and accurately determine the genetic characteristics of various diseases among the country’s population.

This step is expected to allow the country to enter the era of personalised medicine, gene therapy, and future specialised drugs designed based on genetic combinations.

Meanwhile, the state’s efforts to ensure that the academic year resumes at universities nationwide were also discussed during the meeting. This relates especially to public and technological universities, research centres, and institutes.

The President confirmed the resumption of study and the regularity of the examination process in  universities nationwide. He stressed the need to strictly adhere to the consideration of precautionary measures to preserve the health and safety of students against the novel coronavirus (COVID-19).

During the meeting, Abdel Ghaffar also reviewed the current and future projects in public universities, which amount to 425 projects. These come at a cost of about EGP 35bn, distributed over 27 governmental universities, ranging from educational, service, production and treatment projects.

He also briefed the President on the executive plan for projects at research centres and institutes, which amounted to 79 projects at a total cost of about EGP 3bn. This comes in addition to the executive position for new technological universities in 6th of October City, Borg El-Arab, East Port Said, Samanoud, New Assiut, and New Taiba in Luxor.

He further directed for developing educational and research services in all curricula in those universities, and developing inter-programs according to the future needs of the labor market.

Furthermore, the meeting reviewed the system of work in university hospitals, as well as developments related to the automation of those hospitals. These come as part of the national project for the information infrastructure of government universities.

Al-Sisi directed for the provision of all capabilities and equipment necessary to ensure the permanent readiness of university hospitals to deal with the developments of the novel COVID-19 pandemic.