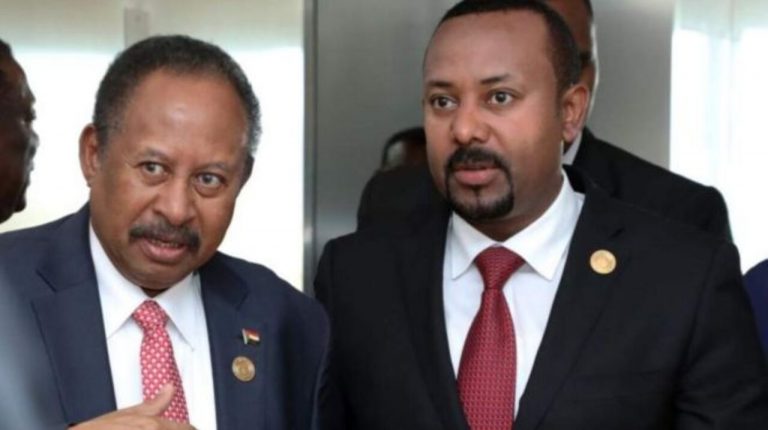 For at least the past half century in the post-independence era, conflicts, wars, the spread of corruption, and military coups, have spread across the African continent.

For decades, Africa has been, and is still, suffering, with the sole exception to this perhaps be Rwanda, which has transformed itself out of a country associated with a terrible genocide. It has, since 1994, become the African model to give hope for real development in the continent.

It was expected that Africa would witness comprehensive development stemming from its large natural resources, particularly in agriculture, fishing, and even tourism, especially in the post-independence phase.

Instead, civil wars broke out, and many countries have experienced exploitation at the hands of Western companies eyeing the natural wealth of these countries. Military coups have even been staged for personal interests, increasing the human suffering across the continent.

Now, Africa is facing the renewed issue of border conflicts, which emerged recently between Sudan and Ethiopia. At the same time, the phenomenon of terrorism has crept into African deserts, especially in sub-Saharan countries and the Sahel, such as Mali, Chad, and now Libya after the collapse of its regime in 2011.

Some countries in Africa have witnessed continuous conflicts, and have seen their resources depleted as a result. An integrated vision for building comprehensive development and economic growth, similar to the Asian model, is also absent.

In this report, Daily News Egypt reviews the top threats facing Africa. Experts explain the weaknesses and strengths of governments in facing their problems, and discuss scenarios for the future of these countries under conflicts and terrorism.

Border tension between Sudan and Ethiopia

Starting with Sudan and Ethiopia, border tension between the two escalated in an unprecedented way over the disputed border area of Al-Fashaqa.

The Sudanese army has now been deployed in the border area adjacent to Gedaref, where Al-Fashaqa is located. It is an area that has witnessed tensions from time-to-time, due to the activities of Ethiopian “Shifa” gangs.

Al-Fashaqa is part of the state of Gedaref, and is split by the River Basalam, along with the State and Atbara Rivers. There is much fertile agricultural lands in the area, estimated at up to 600,000 acres.

The Al-Fashaqa region extends for 168 km along the Sudanese-Ethiopian border, and is located on an area of 5,700 sqm. The region’s remarkable agricultural fertility both distinguishes it and perhaps accounts as the most prominent reason for the disagreement between the two countries.

On the future of the Sudanese-Ethiopian dispute, Sudanese political analyst Shawky Abdel Azim noted that he does not expect a war between the two countries. He added that Ethiopia’s internal situation will not allow for going to war with a neighbouring country.

Abdel Azim continued that Ethiopia has already experienced a massive conflict in the Tigray region, which has caused many people to flee to Sudan. There is also a conflict in Benishangul, the area in which the massive Ethiopian dam was built, as well as the dispute between the Ethiopian government and the Oromo ethnic group.

All the internal conditions are not suitable for war, mainly because Sudan already accommodates many Ethiopian refugees.

“Ethiopia does not have resistors for war and always confirms in its official statement that it will not choose war,” he said, “Sudan does not want to escalate the war, so there is no announced war between two countries.”

Ethiopia cannot announce a war or clarify its intention. It always claimed that what is happening along the borders are acts carried out by militias out of Addis Ababa’s control, the analyst continued.

Regarding Sudan’s escalation, Abdel Azim said that escalation in Sudan is diplomatic so far as it is a reaction to all Ethiopian acts. Sudan sees that the Ethiopian army has spread in a Sudanese land, but Sudan is not expected to go to court. Instead, it is Ethiopia who should resort to judicial routes.

Abdel Azim noted that there are 4,000 armed soldiers on Sudanese land, with Sudan calling for their exit as they will turn into enemies, not a neutral army.

“Ethiopia is claiming that it is facing injustice and Sudan is stubborn to withdraw from lands already deployed by the Sudanese army,” he noted.

In a recent statement, Ethiopia’s Foreign Ministry said it believes “the conflict being trumpeted by the Sudanese government’s military wing could only serve the interests of a third party at the expense of the Sudanese people.”

Sudan’s Foreign Ministry responded by saying, “Slander towards Sudan and accusation of being an agent for other parties is a grave and unforgivable insult.”

It added, “What the Ethiopian Foreign Ministry cannot deny is the third party whose troops entered with Ethiopian troops trespassing on Sudanese land.”

Regarding mediation in a border conflict, Abdel Azim said, “First, I don’t think Egypt will be a good mediator between both countries. Ethiopia will mainly see Egypt as the unneutral side and a side that will have interest in this regard.”

“However, now there is a mediation proposed by South Africa and Saudi Arabia’s initiative to solve the dispute,” he added, “I think the Saudi initiative will be the best since it’s close to all and will even benefit in Ethiopian dam negotiations. Ethiopia has called Turkey to interfere, but I don’t think it will be a neutral side due to its tension with Egypt.”

As for the impact of border tensions on negotiations relating to the Grand Ethiopian Renaissance Dam (GERD), Abdel Azim said the conflict between Ethiopia and Sudan would undoubtedly complicate GERD negotiations and increase Ethiopian obstinacy.

Ethiopia will use this as a card to hinder the process despite it always referring to GERD as a separate matter from the border conflict.

Sudan will be affected by this hindrance more than Egypt, which will affect people and the Sudanese Roseires dam, as both issues will affect each other, he explained.

Moreover, he commented on Juba’s fears about the outbreak of war between Sudan and Ethiopia, saying that he doesn’t believe that there is a direct impact. However, Juba has fears due to direct borders between South Sudan and Ethiopia. There is a very tiny area called Kambala where Nuer tribes reside, where they also had tensions. South Sudan fears that border tension could build opposition groups and create security fragile.

“I think it is not in Eritrea’s interests to be part of the conflict and lose any of the two sides, as there is a common border area between the three countries, and any war will cause impacts to all sides,” Abo Bakr said, “Also there is residential overlap between Sudan and Eritrea and the long-border regions with both countries.”

In addition to this, Ethiopia is facing conflict with the region of Tigray, which is also an enemy to the Eritrean regime. Eritrea would not be happy if both countries went in war as both are close to it. However, Eritrean can play a role in making both countries’ point of view closer and should have proposed mediation between both sides.

Moving to terrorism threats along the African Sahel region, heads of the G5 Sahel countries met in Chad’s capital, N’Djamena, for a two-day summit in mid-February with French President Emmanuel Macron.

Itno called for the international community to “urgently” intensify funding for development, which would contribute to limiting the suspension of the source of jihadist recruitment.

On the sidelines of this summit, Chad announced that it would send 1,200 soldiers on Monday night to the border triangle between Mali, Niger, and Burkina Faso to fight the jihadists.

Assessing the efforts of G5 Sahel countries to combat terrorism in their countries, Sudanese professor in African Affairs Walid El-Tayeb said that however, the main concept of tackling terrorism was is at the top of the reasons that led to the establishment of this partnership between Niger, Mali, Chad, Mauritania, and Burkina Faso in 2014 under the G5 Sahel countries name.

Still, despite that they have been working for more than five years, the efforts of these countries in combating terrorism are still limited. These countries suffer from economic problems that impede them from playing the policing role in the Sahel and Sahara belt.

Abo Bakr also said that on the other hand, the countries of the region suffer from severe political and development imbalances that create an environment burdened with grievances. These provide a stimulating environment for the manufacture of armed protest groups and hosting terrorist currents.

On whether the coup in Mali was a reason to boost militant groups in the Sahel area, the expert said: “Of course, the coup in Mali in August 2020 contributed to providing an environment conducive to the flourishing of armed currents, but we must understand the context in which the coup happened in Mali, as well as the structure of the violent groups,

He noted that one of the reasons that led to Mali’s coup is the repeated attack on the army by some violent currents, with these currents able to lean on a supportive tribal social supporter.

The Central Military Command in Mali has also faced accusations of abandoning its protection of civilians belonging to the Fulan tribe, which led to a massacre there, along with other causes related to elections and others.

Sudanese professor El-Tayeb said, “I want to say that the coup came in a socio-political context and that violent groups are part of the social scene in the region, as is the case in the Boko Haram group, which is based on the Hausa ethnicity. The struggle for power, undeclared support for such groups, and the state of weakness in Mali, make the region is the appropriate environment for hosting terrorist and armed groups. This group is always active in troubled areas, as is the case in Afghanistan, Syria, Iraq, Mali, and Somalia.”

Regarding Egypt’s role with Sahel countries, he said, “I believe Egypt, the region’s countries, the countries of the West African group are called upon to play a role in the region’s stability.”

“In this context, I believe that Turkey is also required to contribute to the fight against terrorism and the region’s stability as long as Turkey is present in Libya and is working on a settlement in the Libyan file with security cooperation with Egypt and other countries. That is why I believe that Cairo and Ankara must have a new view of their bilateral relationship in the context of southern Mediterranean issues and beyond,” El-Tayeb concluded.

The Eritrean expert provided another regarding Egypt’s role to help in combating terrorism in Sahel countries. Abo Bakr said that Egypt has a unique experience in fighting terrorism which must be followed by Sahel countries. Egypt is one of the first countries that faced extremist groups and has excellent expertise in the matter since the 90s whether on freezing intellectual, logistic or economic sources of these groups.

Due to its military and intelligence experiences, Egypt succeeded in combating terrorism, especially after 2013, by controlling hideouts of terrorists in Sinai or other areas in the country. It also created data on their movements and plans, whether in the Middle East or Africa, adding that the Sahel countries need to benefit from Egypt’s experience in this issue since African countries did not have experience with terrorist groups within the past ten years.