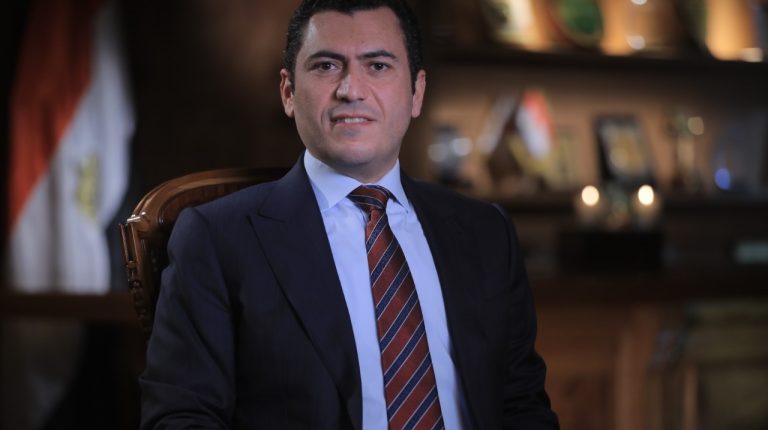 He is also the son of the late businessperson and former Member of Parliament (MP) Mostafa Elsallab. At the age of just 38, here is a young man who knows what Egyptians want, and has the knowledge, experience, determination, and political will that enables him to continue giving as a deputy on behalf of the people in the Egyptian Parliament.

In an interview with Daily News Egypt, Elsallab talks about his priorities now that he has been sworn in himself as an MP, particularly relating to the industry sector. Here, he also gives a heads-up on those laws in need of amendment, and what effect they will have on the country.

Mohamed Mostafa Elsallab holds a Bachelor of Commerce and Business Administration, in addition to a general diploma in modern media and advertising. He serves as the head of the Mostafa Elsallab Group, head of the Royal Ceramica Factories, and head of Mostafa Elsallab commercial companies and exhibitions, and as president of the International Company for Import. A total of 3,500 workers make up the big family of factories and companies.

Mohamed Elsallab also heads the Mostafa Elsallab Charitable Foundation for Community Development, an institution that takes care of more than 5,000 families every month, in addition to material and in-kind support for urgent cases.

He also chairs the Board of Directors at the Mostafa Elsallab Charitable Hospital for free treatment, which includes 20 nurseries for children, 16 units for dialysis, and a room for intensive care for newborns.

Elsallab’s electoral programme depends on supporting the education reform, considering it as Egypt’s national project for the next 10 years.

Elsallab believes that the Egyptian Parliament must issue legislation that guarantees every person in the country access to healthcare, the right to treatment, and access to comprehensive health insurance. The parliament must also take care in building a new generation of productive and educated youth and skilled trainers involved in Egypt’s decision-making process.

Elsallab says that there is a need to restore respect for Egyptian manufacturers, as well as the country’s industry and producers. This will provide both a safe environment for investment in Egypt, and the opportunity to rebuild the positive Egyptian character.

It will also mean greater opportunity to restore security and safety for Egyptian citizens and, and to restore order and discipline on the ground, whilst maximising the role of the business community. At the same time, it will help unleash the energies of Egyptians in social work to raise the general standard of living, address poverty, and improve services in the country’s neediest areas.

What are your priorities in Parliament for supporting Egypt’s industrial sector?

The industrial sector is fixed and it works continuously as a source of state revenue even after the years 2011 and 2013, which witnessed political turmoil. This sector is also coherent, and currently, there is a great tendency for the state to increase exports and support the national industry by increasing the local input.

It is not possible to complete all of the above at present without amending several laws to support industry in Egypt, such as the investment law, which requires multiple incentives to attract investors.

There is a problem with the subordination of lands, including those which belong to the Industrial Development Authority (IDA) and which are cheap, in addition to those lands which belong to the New Urban Communities Authority (NUCA) or governorates’ administrative authorities. There was a proposal to annex all the lands allocated for industrial investment to the IDA.

The state is moving towards setting up a map of industries, and this can be seen from the establishment of areas dedicated to specific industries, such as the Damietta Furniture City. We need a clear map of industries so that investors can inject their investments in the areas in which Egypt needs to increase production.

I call on the Egyptian state to open up more areas for industrial and commercial exchange with Africa through the activation of the country’s navigational fleet to easily reach Africa.

There is poor clarity regarding some articles of the law on procedures for industrial licences. Will you present a proposal to amend the law during the current parliament?

The recent updates on industry laws took place between the 1930s and 1940s, and currently, within the industrial committee in parliament, we are working on issuing a unified industry law. This will include developments that occurred and which accompany the fourth industrial revolution, because the updates that were made to these laws were in the period of the first industrial revolution.

What current laws need amending or activation? What will be the impact of this on national industry?

We need laws that support the local industry, to increase the percentage of exports, and this may be done by operating closed factories, saving energy, and preventing double taxation. We also need to encourage people to make more investments in the field of industry, and we are working in cooperation with the Ministry of Finance to amend and reduce taxes facing investors.

We are also working with the Ministry of Petroleum and Mineral Wealth to adjust energy prices, as well as to activate local product support by state agencies. There is a political will to raise Egyptian exports from EGP 24bn to EGP 100bn within four years. It helps that Egypt is currently one of the strongest countries in which an investor can work.

Which of the sectors in Egypt do you invite foreign investors to go into?

The sectors that I invite investors abroad to go to are the mining sector, because there are not many investors in it. The state also is very open to and strongly supports investment in this sector.

The Egyptian Government is currently seeking optimal use of resources by relying on raw materials for manufacturing instead of exporting them.

The state will provide a clear-featured industries map. Within a few months, it is set to be the largest guide for investors, and will include cities designated for industries.

What is your evaluation of the performance of banks affiliated with the Ministry of Trade and Industry, and what are your suggestions to further activate their role in supporting the industrial sector?

We need to discuss the role of these banks in supporting the local industry by purchasing modern technology. Now, banks must work to bear the risks that investors face in the industry. These banks have now turned to work in the commercial field to achieve profit. They had a major role in industrial development and export development.

How can the role of the IDA be supported to stimulate local industry?

The authority must monitor undeclared industries and everything that is manufactured inside Egypt, not only from those industries that are registered. They have a mechanism to access all unregistered industries.

What are your suggestions to support and encourage small investors and manufacturers?

A law was issued last September to support small investors and manufacturers by providing them with areas in which to establish factories. However, the conditions that exist to support the investors are not as easy as the requirement for five years of experience to obtain loans.

What are your suggestions for shortening the period of obtaining an industrial licence?

We need to implement the law and prevent authorities from interfering with the industrial investment file.

In your opinion, what are the best current industrial projects that will revolutionise the Egyptian economy?

These include new industrial zones and technological zones located on the banks of the new Suez Canal, the crops sector, and the furniture, spinning, and weaving industry.

Can you explain more about the bill to increase the penalties for those who bully people with disabilities that you submitted to Parliament?

I submitted a bill to the House of Representatives to increase the penalty for the bullying of people with disabilities, in the first move to stop all forms of bullying against people with special needs.

The draft law adds a new article, No. 50 bis, to the Rights of Persons with Disabilities Law, which stipulates that the punishment for those found guilty is imprisonment of at least one year, and a fine of between EGP 50,000-EGP 100,000.

The punishment is increased if it is conducted by two or more persons, or if the perpetrator is one of the victim’s relatives. It is also increased if it is carried out by one of those responsible for the care of that person with a disability, or who has authority over them.

This is the first step in my role as a parliamentary deputy, but the coming period will witness other moves on the ground to stop the bullying of people with disabilities and to exploit their disability to ridicule them, or insult them in a very disgusting and disrespectful way. This is inconsistent with the values ​​of Egyptian society or religious teachings. For this law to be passed, they need support from all people, for the case to receive the necessary attention.