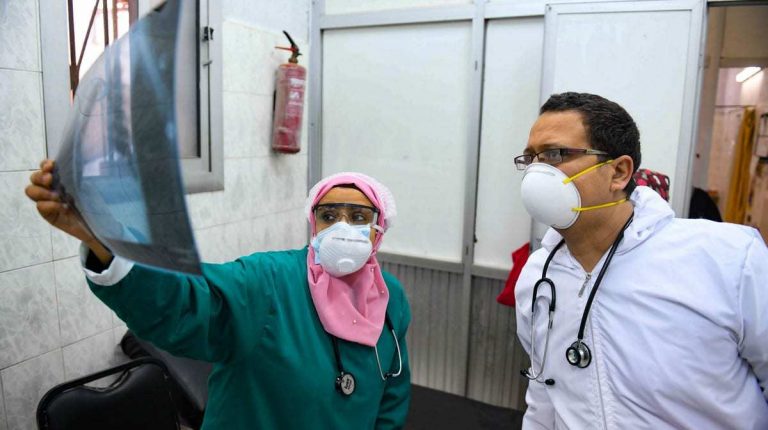 On social media groups gathering people who intend to travel to Germany and the US, several users post opportunities and scholarships for doctors, medical technicians, and nurses.

These grab the attention of hundreds of Egyptian medical students and doctors. Among these users is Mostafa, an orthopaedic specialist, who is currently finishing his last year of the compulsory government internship where fresh graduates have to work/train in public hospitals.

Speaking to Daily News Egypt on the phone, he said that he intends to travel to Germany once he finishes his residency.

He plans to apply for the Masters, and later to enrol at a hospital where he will concurrently pursue his PhD studies, a path that most doctors who immigrate to European countries take.

Mostafa cited “low income and his dreams of a brighter future” as reasons for such a step. As a safeguard, he will alter his membership at the Egyptian Medical Syndicate (EMS) as a private practitioner doctor, where he will not be obligated to work anymore in the government.

According to government statistics, around 7,200 new doctors graduate every academic year, but less than 50% actually register and practice.

As the world is starting to plan for the period in the wake of the novel coronavirus (COVID-19) pandemic, the topic of immigration among Egyptian doctors has gradually found its way into some government, syndicate, and parliamentary discussions. All of these point out how severe the problem is, while others shared several solutions.

In a speech before the Egyptian parliament this month, Minister of Health and Population Hala Zayed asserted that “67% of Egyptian doctors work abroad,” citing low incomes and the haphazard demographic distribution of the residency system.

In many cases, doctors were assigned to complete their residency in a hospital or medical centre that is very far from their home.

Egyptian doctors can not pursue private careers, a Masters, or a PhD, without completing their residency year.

Ayman Aby Al-Ela, member of the human rights committee in the Egyptian Parliament, criticised the minister and her comments for lacking a solution to the mentioned problem.

He added, “We have to encourage doctors to work and not immigrate, especially because Egypt has spent a lot on students when they were studying.”

In press statements, Mohamed Abdel Hamid, member of the Egyptian Medical Syndicate’s (EMS) high board, said that there is no clear reference for the numbers who are currently employees abroad.

However, he added, “We can draw a conclusion of how severe the problem is if we calculate the number of doctors who requested to become private practitioners between 2018 to the end of 2020, which amounts to 12,600.”

In a study published by the privately owned Egyptian Center for Economic Studies, statistics showed that around 7,000 doctors have emigrated since the start of the pandemic.

In addition to citing the usually mentioned reason of low salaries and benefits, the report also highlighted the high rate of deaths among Egypt’s medical workers. According to the official EMS count, 379 doctors have passed away from COVID-19.

The study published such numbers as documenting one of the aspects of how the global health crisis will affect the health sector. It warned that that the pandemic might worsen due to the lack of adherence to the precautionary measures, and the rising number of deaths among medical workers. It also pointed out that the Ministry of Health and Population did not clarify how it will deal with this deficit of doctors.

However, in different statements and media appearances the minister asserted that there is no current shortage in doctors and that hospitals are working properly with full capacity when it comes to human resources.

The ministry also vowed, and has already started to provide, COVID-19 vaccines to healthcare workers, describing them as the frontline against the pandemic. Similarly, in several statements the ministry asserted that all hospitals have enough personal protective equipment (PPE) and oxygen cylinders.

In response, the Ministry of Health and Population decided, in May 2020, to allocate 20 beds at each quarantine hospital across the country to healthcare workers who have been infected with the virus. It also pledged to expand PCR tests and other related tests for medical workers.

To counter this shortage, the ministry has approved a new law that stipulates fresh graduates will spend three months working in medical centres. Once there, they will participate in diagnosing patients and treating mild cases, before spending another nine months in specialised hospitals.

Graduates have to register to enrol in this system. According to Al-Ahram newspaper, however, around 7,000 students have declined to register, while several social media pages and groups composed of graduates opposed this new system.

Abdel Hamid said that the state has to enhance its efforts to curb the immigration of doctors. He added that the solution is not to increase the number of students working in government hospitals nor by establishing more private medical universities.

“The solution is to increase salaries, enforce the medical responsibilities law, punish anyone who abuse doctors in hospitals and clinics, and provide enough equipment and opportunities for pursuing Masters degrees,” he said.

Atef, a doctor who left Egypt last year to work at a private hospital in New York, echoed the solutions pushed by Abdel Hamid.

“There have been incidents where the doctors get attacked in the hospitals by thugs or families of a patient because he died, and no one was held accountable,” he said.

Atef added that many of his colleagues and friends who are still studying are thinking of the same option (working abroad), fearing the same fate.

Atef also said that several of his colleagues cited the high death rate of COVID-19 among doctors in Egyptian hospitals as a reason for their attempts to apply for jobs and studies abroad.

Egypt has promised that medical workers at isolation hospitals across the country will be given priority in receiving the COVID-19 vaccine, in addition to those suffering from chronic diseases and the elderly.

Since the start of the pandemic in Egypt in February 2020, the EMS has been pressing for greater protection for Egypt’s healthcare professionals. It has consistently demanded that they be provided with the required PPE and healthcare facilities should they become infected.

Atef added that medical students, and specially male students, spend seven years studying which might be followed by one to three years of military conscription.

“After all these years, we have the right to have a decent salary to enable us to live a decent life,” he noted.

EMS Secretary-General Osama Abdel Hay said that the environment that doctors are currently working in is harsh in addition to the low salaries they receive.

He added that the “lack of safety measures in their work, the difficulty of achieving and receiving medical degrees, and the very low amount of the compensations are among a long list that push doctors to resign and work abroad.”

Abdel Hay demanded that the Ministry of Health and Population should find alternatives to encourage doctors to stay and work and serve their country where they have a chance to prosper.

In the first months of the pandemic, President Abdel Fattah Al-Sisi ordered, to increase allowances of medical professionals by 75%, and to issue a bounce to personnel working in public hospitals.

The syndicate has also asked Al-Sisi to direct the Cabinet to apply Law No 16 of 2018, which established a fund honouring security and military martyrs or casualties, to any individual from the medical team who was injured or died from infections.
Ola Ahmed, another doctor who is in the last stages of travelling to Germany, said that most of her family work as doctors, and that she wanted to continue working in a government hospital. However, one incident made her change her mind, when she was attacked by the family of a patient who died in the emergency room. She explained that she was not able to work again because she did not feel safe.

“At the time, no one was held accountable and the family which attacked me and my colleagues wanted to sue us,” she added.

However another doctor, who requested anonymity, gave another account saying that the current situation requires that doctors should be conscripted and well compensated as well.

“We are in a current state of war with the pandemic. Anyone who leaves should be held accountable,” they added.

Soaad Ali, a doctor who is willing to stay in Egypt and finish her studies, says that there should be more conversation and dialogue between the doctors and the ministry. In addition, she requested that the media should not portray an evil image of doctors, especially the ones working in harsh conditions in government hospitals.

Doctors’ efforts are invaluable and no financial compensation can compensate them or their families for serious illness or death, however, feeling the appreciation from the government will encourage them and increase their safety and feeling of belonging, she said.

She also demanded that the media should not explain any “opposition among the doctors as an act of treason.” The doctor referred to the incident when some pro-state media outlet claimed that the now outlawed Muslim Brotherhood group has infiltrated the Egyptian Medical Syndicate after the syndicate demanded the Government provide PCR tests to doctors who show symptoms.

Ali added that the COVID-19 pandemic will end soon, but other epidemics and disease may appear, noting, “Hence we have to prepare our doctors and medical staffs to be ready to face any challenges.”