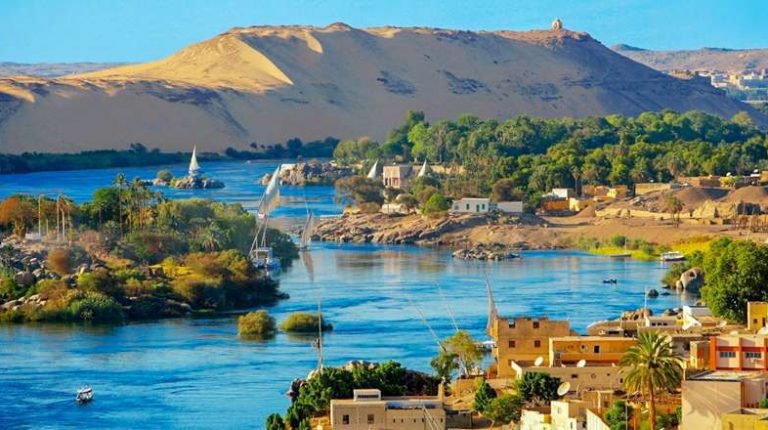 The year 2020 was one full of disasters, and gloom. It was a very hard year due to the novel coronavirus (COVID-19) pandemic that caused millions of deaths, and even more infections.

The pandemic caused a severe impact on all aspects of daily life, including the economy, with tourism no exception to this rule.

This, on its own, is more than 11 times the loss recorded during the 2009 global economic crisis, according to the United Nations World Tourism Organization (UNWTO) annual report.

The UNWTO described 2020 as the worst year in tourism history, with Egypt very badly hit due to its heavy economic reliance on this sector.

Egypt’s tourism sector has suffered a significant downturn following the 2011 Revolution, from which the sector suffered a devastating blow. The sector took further hits following the downing in Sinai of a Russian passenger plane, in late October 2015, in which all passengers were killed.

Following the plane crash, Russia imposed a travel ban on Egypt, while the UK suspended all flights to Sharm El-Sheikh amid concerns over the airport’s security measures, and banned travel to Sinai.

The sector has, since 2018, begun to revive again, regaining its strong position as Egypt is strategically located on both the Mediterranean and Red Seas.

The country’s 2019 tourism revenues hit $13.03bn, the highest in the sector’s history, and it was expected to achieve an unprecedented hike in such revenues in 2020.

Indeed, the number of tourists who visited Egypt during the period from 1 January until the travel ban on 19 March 2020 reached 2 million, according to Ministry of Tourism and Antiquities data.

But unfortunately, the COVID-19 dashed the dreams of the tourism sector, causing sector revenues in Egypt over 2020 to slump by 70% year-on-year (y-o-y). The sector saw only $4bn in revenues due to the COVID-19 crisis, a massive decrease on the previous year, according to Minister of Tourism and Antiquities, Khaled El-Anani.

Reuters quoted the minister as saying that a total of 3.5 million tourists visited Egypt in 2020, compared to 13.1 million in 2019.

As mentioned before that the problem is global, so the competition now between countries relates to how fast they can recover from the hiatus caused by the global health crisis.

The question now should focus on how to speed up Egypt’s recovery. This comes in addition to the lessons learned from the COVID-19 pandemic, and when Egypt could return to 2019 levels. Daily News Egypt dug into the answers for these questions through interviewing different experts.

When will recovery happen?

“In general there is currently a movement in the tourism, due to the mid-year holiday for schools and universities in Egypt, I think the average current occupancy rate in Luxor, Aswan, Hurghada, Sharm El-Sheikh, ranges between 40%-50%, while the occupancy rate in Cairo is only 30%,” Ehab Abdel Aal, Treasurer of the Cultural Tourism Association, told Daily News Egypt.

He added, “I think the occupancy rates will decrease in March as the holiday ends, reaching about between 15%-20% in Luxor, Aswan, Sharm El-Sheikh, and Hurghada, and will also decline to 15% in Cairo, before starting to increase again by the end of March and the beginning of April due to the Easter holidays.”

Abdel Aal said that the tourism will start to recover between May and June, but returning to 2019 levels depends largely on the pandemic’s progression.

“I think that in light of the current circumstances, it is expected to start resuming the tourism movement to Egypt as of Easter in April or at the latest in May this year,” according to Said El Batouty, UNWTO economic adviser, member of the UN Economic Commission for Europe, and board member of the German Travel Association.

El Batouty said that it is expected that the recovery will be turbulent during the next summer season in 2021, provided that the real recovery begins from the winter 2021-2022 season (that is from October/November 2021).

He said that he personally expects that the demand will stabilise and that the reservation rates for the 2021-2022 winter season will be very good and stable.

“My expectation is also that Egypt, as a tourist destination, will be one of the fastest tourist destinations in terms of recovery rates, as demand is strongly present but in a state of extreme latency or what we call a pent-up demand,” El Batouty said.

He also said that this will be launched as soon as COVID-19 imposed limits start to be relaxed, which include fear of infection, strict travel restrictions, and procedures that spoil the pleasure of travelling.

He further explained that these scenarios depend on two things, the vaccination process globally, and the demand of Q3 and Q4 2021, noting that the higher the demand the faster the recovery.

Elhamy El-Zayat, former Chairperson of the Egyptian Tourism Federation (ETF), has said that Egypt’s tourism will not recover to its pre-pandemic 2019 levels before 2024.

El-Zayat said that this was due to the lack of trust and uncertainty people felt regarding travel. This holds in spite of the worldwide vaccination programmes against the virus, as travellers would still not have the confidence to pack their bags due to the economic consequences of the pandemic.

“This is also because the airlines are not expected to return to 2019 standards until 2024,” according to El-Zayat.

How to boost recovery?

El-Zayat briefed the lessons learned from covid-19 in three lessons including, digitalisation, and rationalisation of staff and spaces.

Much has been learned during the COVID-19 pandemic. The most important of these was that Egypt’s vision or strategy for tourism was an old vision that did not keep pace with the global changes, according to Hesham El-Damery, former chairperson of the Egyptian Tourism Promotion Board.

“We need a national strategy adopted by the state to support the sector, on top of this strategy is aviation,” he said.

He explained that the demand for travel to Egypt is very high. Although Egypt has large territories connected to seas, it seems like a landlocked country in terms of tourism, as between 98%-99% of tourists come to Egypt through air flights. As a result, it is necessary to work on a mechanism to attract the huge number of tourists who want to visit Egypt, through enhancing the aviation system, which will be based on market studies.

El-Damery added that the strategy should also include the basic infrastructure, citizen behaviour, and market studies. He also said that Egypt used to rely on quantitative tourism, not quality tourism.

“We must stop talking about our tourism as a number of arrivals, and must begin to talk about tourism from the revenues perspective,” he said.

El-Damery noted that before 2014, only four markets, namely Russia, Germany, England, and Italy, made up more than 75% of Egypt’s annual tourism revenues. However, since 2015, Egypt began to attract non-traditional markets, including visitors from Ukraine and Poland.

He continued that it is necessary for the next period to diversify more the markets through market studies and open new markets.

“I think it’s time now to change, and focus on the quality tourism as mass tourism will not be there anymore because travel will not be affordable for all as it was previously, and it will not be a priority for people, even for business people, as they will remain afraid of the experiences of lockdown globally,” El-Damery said, “Travel will also be expensive for people, bearing in mind the economic repercussions of the pandemic.”

He also noted that the economic recovery from the pandemic will only take place after three or four years, so the decision for travelling will not be easy.

El-Damery said that the country’s medical capabilities will still have an important and influential role in the people’s decision to travel, so the strategy needs to include the Ministry of Health.

“There was no diversity of tourism patterns, as 90% of the tourism coming to Egypt until 2019 was beach tourism, so we have to take advantage of the competitive advantage of the Egyptian tourism product, as we are distinguished by one-third of the world’s monuments, and cultural tourism should be the focus of tourism in Egypt,” El-Damery said.

He mentioned that he wishes that tourists come and visit, for example, Hurghada to enjoy beaches, and then go to Luxor and Aswan, to see the antiquities and cultural tourism.

“But in order to make this, we need a network of roads, railways, and internal aviation, which require more investment in the infrastructure of tourist cities, so that’s why I said we need a national strategy that includes all concerned institutions to issue plans and decisions to support the sector” El-Damery said.

He said that Egypt already has more than 220,000 rooms, and a similar number under construction, adding that he does not recommend increasing hotel capacity in tourist cities, but to invest in aviation or any need that serves tourism.

“If we adapt this new tourism strategy, Egypt would achieve the highest tourism returns in its history in 2023, but with a smaller number of arrivals,” he said, “Through this strategy, we also enhance the product, quality and experimentation, having an aviation strategy that is in line with the tourism strategy we have.”

He mentioned that after adopting this strategy, there is likely to be a decline in the phenomenon of below-cost pricing, so that’s why we will witness a smaller number of the arrivals, but a hike in the revenues.

“I think countries like Egypt that have natural gains from the sun and a moderate atmosphere throughout the year will receive or have a very large share of tourism,” El-Damery expected.

“But the biggest mistake that we should not do is to wait for the tourism recovery, while operating with the same mechanism from before the COVID-19,” he said, “If we do this all the countries will be enhanced in terms of tourism and will take all the tourists from us.”

For his part, Kaoud said that on top of the government’s fast economic recovery plans, he would suggest the following, fiscal policy to include tax reductions, monetary policy to include credit guarantees to banks and rescheduling of bank credits.

At the same time, there should  be employment and skills to include temporary wage compensation, income support schemes, and digitalisation and online/distance work widely supported.

In addition to this, there should be market intelligence to include timely and robust data to support strategic planning, along with precise monitoring of the socio-economic impact and innovative smart tools and solutions.

Along with this, there should  be public-private partnerships to include enhanced cooperation, consultations of governments with relevant stakeholders, and inter-governmental committees.

“From a macro perspective, I would suggest the following, enriching the accessibility to Egypt and speeding up the operation of the New Administrative Capital Airport, Sphinx Airport, and Alamein Airport, together with expanding the current main airports,” Kaoud suggested.

He noted that this would come in addition to marketing and communications plans that meet the new target segments and the evolving needs of today’s travellers.

This would also require the need for a hospitality council and/or ministry that enhances Egypt’s hospitality industry in terms of hotels and resorts. It would integrate with the right workforce and calibres that will flourish the industry and set Egypt apart.

There is no plan for speeding up the recovery, but there is a plan to rescue the sector, including preserving the tourism product, through activating all presidential initiatives that support the sector and stopping all taxes and fees on tourism facilities, according to Abdel Aal.