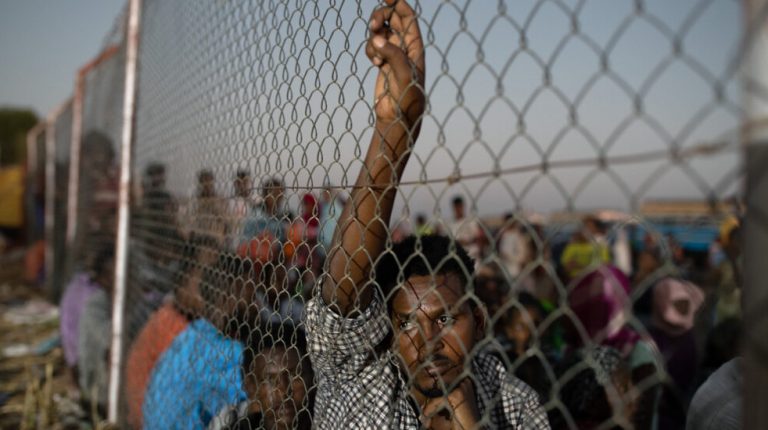 US Secretary of State Antony Blinken called, on Saturday, for the African Union (AU) and other international partners to help address a deepening crisis in Ethiopia’s northern Tigray region.

Blinken’s statements came as he condemned alleged atrocities in fighting there, and suggested growing frustration with the Ethiopian and Eritrean response to what the US’ top diplomat described as a “worsening humanitarian crisis.”

His remarks came a day after Amnesty International released a report accusing Eritrean forces of killing hundreds of civilians in Tigray in a 24-hour period last year. Eritrea has rejected the accusations on an incident Amnesty International has described as a potential crime against humanity.

“The US is gravely concerned by reported atrocities and the overall deteriorating situation in the Tigray region of Ethiopia,” Blinken said, “We ask international partners, especially the African Union and regional partners, to work with us to address the crisis in Tigray, including through action at the UN and other relevant bodies.”

Thousands of people have died, hundreds of thousands have been forced from homes and there are shortages of food, water and medicine around the region of more than 5 million people.

Ethiopia and Eritrea have denied that Eritrean troops participated in the conflict, though dozens of witnesses, diplomats, and an Ethiopian general have reported their presence.

Still, the state-run Ethiopian Human Rights Commission released a statement on Friday timed to coincide with the Amnesty report. The statement said preliminary investigations indicated that Eritrean soldiers had killed an unknown number of civilians in Axum, an ancient city in northern Ethiopia. It also said the killings were in retaliation for an earlier attack by TPLF soldiers.

Eritrean troops fighting in Tigray state systematically killed hundreds of unarmed civilians in the northern city of Axum on 28-29 November 2020. They are said to have opened fire in the streets and conducted house-to-house raids in a massacre that may amount to a crime against humanity, Amnesty International said in a new report.

Amnesty International spoke to 41 survivors and witnesses, including in-person interviews with recently arrived refugees in eastern Sudan and phone interviews with residents of Axum, as well as 20 others with knowledge of the events.

They consistently described extrajudicial executions, indiscriminate shelling and widespread looting, after Ethiopian and Eritrean troops led an offensive to take control of the city amid the conflict with the Tigray People’s Liberation Front (TPLF) in mid-November.

Satellite imagery analysis by the organisation’s Crisis Evidence Lab corroborates reports of indiscriminate shelling and mass looting, and identifies signs of new mass burials near two of the city’s churches.

“The evidence is compelling and points to a chilling conclusion, that Ethiopian and Eritrean troops carried out multiple war crimes in their offensive to take control of Axum,” said Deprose Muchena, Amnesty International’s Director for East and Southern Africa, “Above and beyond that, Eritrean troops went on a rampage and systematically killed hundreds of civilians in cold blood, which appears to constitute crimes against humanity.”

Muchena added, “This atrocity ranks among the worst documented so far in this conflict. Besides the soaring death toll, Axum’s residents were plunged into days of collective trauma amid violence, mourning and mass burials.”

The mass killings came just before the annual celebration at Axum Tsion Mariam, a major Ethiopian Orthodox Christian festival on 30 November. It has compounded the trauma by casting a pall over an annual event that typically draws many pilgrims and tourists to the sacred city.

On 19 November 2020, Ethiopian and Eritrean military forces took control of Axum in a large-scale offensive, killing and displacing civilians with indiscriminate shelling and shooting.

In the nine days that followed, the Eritrean military engaged in widespread looting of civilian property and extrajudicial executions.

Witnesses could easily identify the Eritrean forces as they drove vehicles with Eritrean licence plates, wore distinctive camouflage and footwear used by the Eritrean army, and spoke Arabic or a dialect of Tigrinya not spoken in Ethiopia.

Some bore the ritual facial scars of Ben Amir, an ethnic group absent from Ethiopia. Some of the soldiers also made no secret of their identity, and openly told residents they were Eritrean.

According to witnesses, the Eritrean troops unleashed the worst of the violence on 28-29 November. The onslaught came directly after a small band of pro-TPLF militia attacked the soldiers’ base on Mai Koho mountain on the morning of 28 November.

The militiamen were armed with rifles and supported by residents brandishing improvised weapons, including sticks, knives and stones.

Sustained gunfire can be heard ringing out across the city in a video recorded early that day from several locations at the bottom of the mountain.

A 22-year-old man who wanted to bring food to the militia told Amnesty International, “The Eritrean soldiers were trained but the young residents didn’t even know how to shoot… a lot of the [local] fighters started running away and dropped their weapons. The Eritrean soldiers came into the city and started killing randomly.”

Survivors and witnesses said Eritrean forces deliberately and wantonly shot at civilians from about 4pm onwards on 28 November.

According to residents, the victims carried no weapons and many were running away from the soldiers when they were shot. One man who hid in an unfinished building said he saw a group of six Eritrean soldiers kill a neighbour with a vehicle-mounted heavy machine-gun on the street near the Mana Hotel. He noted that his neighbour was shot in the head from a distance of about 10 metres by soldiers.