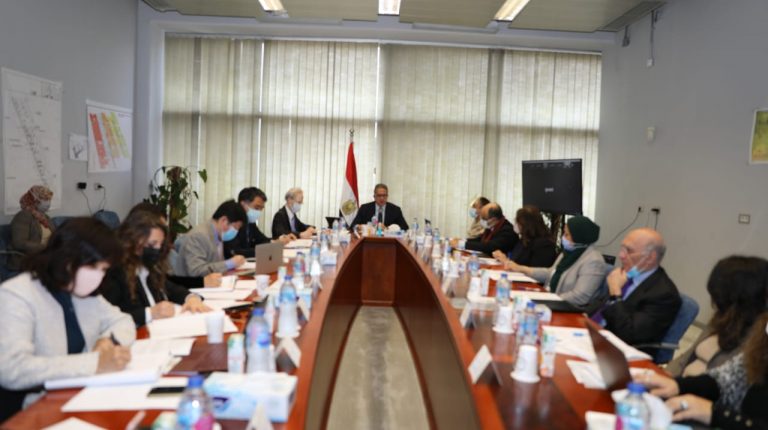 Representatives working on behalf of Egypt and Japan have met to discuss the latest developments at the Grand Egyptian Museum (GEM).

As part of the discussions, Egypt’s Ministry of Tourism and Antiquities revealed that the coalition that will provide and operate services at the GEM will be announced in the next few days, according to the Ministry`s press statement

The meeting was chaired by Minister of Tourism and Antiquities Khaled Al-Anani, in the presence of: Japan’s Ambassador to Cairo Noke Masaki; Omura Yoshifumi, Chief Representative of the Japan International Cooperation Agency (JICA) Egypt Office; and Major General Atef Moftah, General Supervisor of the GEM.

Other attendees at the meeting included the Director General of the Middle East and Europe Department at JICA, and a number of senior officials in Tokyo who participated via video conference.

During the meeting, the latest developments in the works on the museum were reviewed, along with the process of negotiation and contracting with the coalition that will provide and operate services in the museum.

This came in addition to discussing the possibility and mechanisms of supporting the museum with experts from Japan specialising in museums, technical cooperation, restoration, and technology.

Last week, Ambassador Noke told Daily News Egypt in an interview that Japan is currently coordinating with the Egyptian Government on technical cooperation in the area of management for the GEM.

“We hope to maintain our good relations with the museum, as a symbol of cooperation between Japan and Egypt,” the Ambassador said, “Japan is honoured to be part of the GEM project, through the equivalent of $800m in loans, as well as providing technical cooperation for the preservation and restoration of relics.”

He added that this comes in addition to his country’s contribution in the restoration of the Second Solar Boat of the Pharaoh Khufu, whose excavation has just finished. The boat is set to be exhibited on the GEM premise, Ambassador Noke said earlier.

The meeting also touched on the promotional campaign for the museum. Ahmed Youssef, CEO of the Egyptian Tourism Promotion Board (ETPB) told Daily News Egypt a few days ago that Egypt will launch a global campaign featuring the country’s various touristic products and destinations. Under this campaign, there will be different sub-campaigns, with one devoted to promoting the GEM.

Youssef said that the museum’s promotion will be an international campaign that will be carried out by the ETPB, in partnership with a group of international specialised companies.

He did not, however, disclose the names of those companies, as the ETPB is still in negotiations with several sides.

The campaign is set to comprise of various promotional contents for television, radio, social media, besides purchasing adequate advertising spaces. The campaign’s launch date is subject to determining the opening date of the museum itself, which in turn depends on the situation relating to the novel coronavirus (COVID-19) and the resumption of travel.

During the meeting, El-Anani stressed the depth of relations between Egypt and Japan. He referred to the existing cooperation between the two countries at the tourism and archaeological level, especially in the Grand Egyptian Museum project, which is one of the major cultural projects in Egypt.

He also reviewed the latest developments in the museum’s work and the results of the transfer of artefacts, noting that 55,000 artefacts have so far been transferred to the museum from across Egypt. They are being restored in the museum’s antiquities restoration centre.

For his part, Ambassador Noke praised the efforts made to finish the works in the museum, describing it as an exceptional project. He added that it is an example of cooperation between Egypt and Japan in the field of tourism and cultural work.

At the same time, he stressed that the dream will soon be a reality as every time he visits the museum, he finds more achievements.