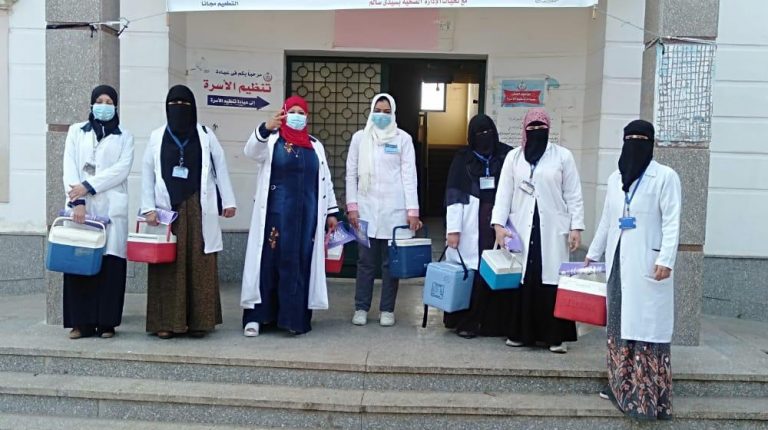 Egypt’s Minister of Health and Population Hala Zayed announced, on Monday, that just over 8.42 million children have been vaccinated during the first day of the national Poliomyelitis vaccination campaign.

The figure includes 6,730 non-Egyptian children living in the country, with non-Egyptian paediatric cases also included on the vaccination programme.

The number equals about 52.9% of the total targeted number. The campaign will cover all regions across Egypt to reach 100% of the 16.7 million children targeted, including Egyptians and non-Egyptians residing in the country.

The campaign was launched on Sunday from the Ahalina Medical Center in the city of Salam in Cairo, and is set to run from 28 February to 3 March 3 2021. Vaccination under the programme is free of charge for children from birth to the age of five years old.

In a statement, the Ministry of Health and Population said that the governorates with the highest frequency of citizens in the campaign are: Sharqeya, Giza, Cairo, Daqahleya, Beheira, Gharbeya, and Alexandria with coverage rates exceeding 90%.

The ministry also said that children ranging in age from newborns to five years of age will be vaccinated with two consecutive doses of the monovalent vaccination through the implementation of two campaigns.

Vaccination aims at raising community immunity against polio, as a pre-emptive step in conjunction with the outbreak of the disease in a number of neighbouring countries in the Eastern Mediterranean Region.

The vaccination process is done through fixed teams in more than 5,400 health offices and units, and medical centres. This is in addition to mobile teams in major squares, train and metro stations, and next to mosques, churches, clubs, markets, bus and car stops, from 8:00 to 17:00.

WHO warns of immunisation services suspension amid COVID-19