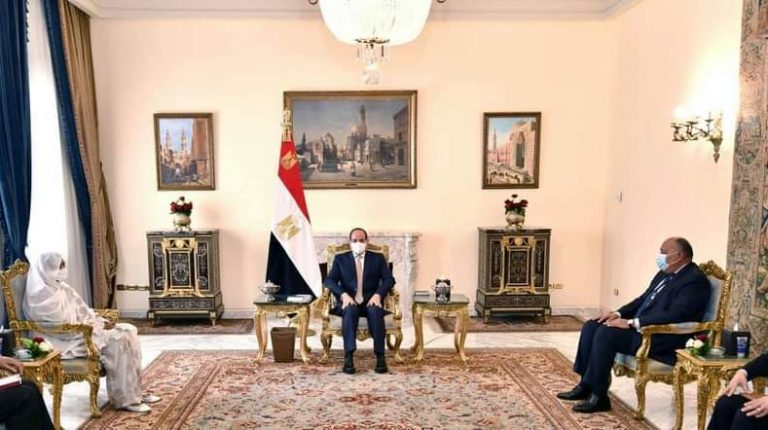 The President also expressed Egypt’s support for all efforts to promote peace and stability in Sudan, asserting that Sudan’s stability is an integral part of the security and stability of Egypt.

He added that Egypt is ready to continue transferring its experience in economic reform and the training of Sudanese workers. At the same time, Al-Sisi confirmed Egypt’s support for all aspects of bilateral relations with Sudan, to promote development and construction projects.

During the meeting, Al-Sadik expressed Sudan’s aspiration to improve joint cooperation between the two countries, and to benefit from the Egyptian experience to achieve economic reform. She hailed the sincere Egyptian support for preserving stability in Sudan.

At an earlier joint press conference with the Sudanese minister, Shoukry confirmed that Egypt is committed to supporting the transitional phase in Sudan. He said that there is a common political will between Egypt and Sudan to coordinate in all fields.

He also noted that his country lends its support to the aspirations of the Sudanese people for progress and prosperity, and achieving the goals of the December 2018 revolution.

Shoukry said the economic component is very important in pushing forward the relations between the two countries, and that there are areas of cooperation between them in education and agriculture.

The minister confirmed that both countries agreed to reach a legal and fair agreement on the Grand Ethiopian Renaissance Dam (GERD). He noted that reaching an agreement on the dam will prevent tensions and confrontation in the region.

Shoukry pointed out that the negotiation track with Ethiopia on the Dam and the filling and operation agreement has stalled, and that negotiations have been interrupted

He did, however, confirm Egypt’s support for the Sudanese proposal to form an international quartet on the GERD negotiations.

“Any policies to impose a fait accompli on the GERD is considered a transgression, as we have negotiated with Ethiopia for nearly a decade, and we have reached a milestone that will affect the interests of us all,” he added, “There are no negotiations without a time limit on the issue of the GERD.”

Egypt will support all measures to preserve the capabilities and rights of its people, he noted, adding that international parties, including those in Africa, will take positions on the issue of Renaissance Dam.

For her part, Al-Sadik said, “Sudan will not give up its rights and land on the border with Ethiopia.”

She added that the second filling of the Ethiopian dam threatens 20 million Sudanese, who face issues with accessing the River Nile waters. The minister also pointed out that the dam may be a gateway to more conflicts on the continent, “but we are trying to prevent this”.

Al-Sadik stressed the importance of reaching a binding legal agreement on filling and operating the GERD that would achieve the interests of the three countries. It would also preserve the water rights of Egypt and Sudan, whilst limiting the damage this project is likely to cause to the two downstream countries.

Egypt and Sudan affirmed that they have political will and a serious desire to achieve this goal at the earliest possible opportunity. They called on Ethiopia to show goodwill and engage in an effective negotiation process in order to reach this agreement.