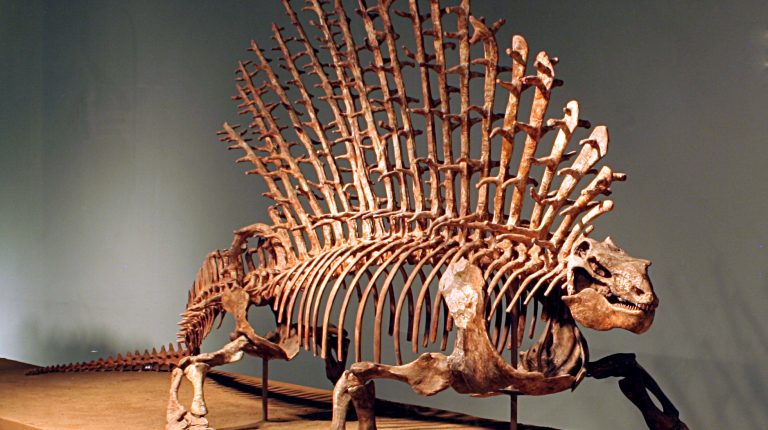 The backbone is the Swiss Army Knife of mammal locomotion, and can function in all sorts of ways that allow living mammals to have remarkable diversity in their movements.

They can run, swim, climb, and fly, all due, in part, to the extensive reorganisation of their vertebral column, which occurred over roughly 320 million years of evolution.

Open any anatomy textbook, and you will find the long-standing hypothesis that the evolution of the mammal backbone, which is uniquely capable of sagittal (up and down) movements, evolved from a backbone that functioned similar to that of living reptiles, which move laterally (side-to-side).

This so-called “lateral-to-sagittal” transition was based entirely on superficial similarities between non-mammalian synapsids, the extinct forerunners of mammals, and modern-day lizards.

In a paper published on Tuesday in the journal Current Biology, a team of researchers led by Harvard University challenge the “lateral-to-sagittal” hypothesis. They have done so by measuring vertebral shape across a broad sample of living and extinct amniotes (reptiles, mammals, and their extinct relatives).

Using cutting-edge techniques, they map the impact of evolutionary changes in shape on the function of the vertebral column. The researchers show that non-mammalian synapsids moved their backbone in a manner that was distinctly their own, and quite different from any living animal.

The team, led by first author Katrina E Jones, a former Postdoctoral Researcher at Harvard University’s Department of Organismic and Evolutionary Biology, found that while the degree of sagittal bending does increase during mammal evolution, the backbones of the earliest synapsids were optimised for stiffness.

The evolutionary transition to mammals did not include a stage characterised by reptile-like lateral bending. Instead, they discovered that modern lizards and other reptiles have a unique backbone morphology and function that does not represent ancestral locomotion, and that the earliest ancestors of mammals did not move like a lizard, as scientists previously posited.

“The long-held idea that there was a transition in mammal evolution directly from lateral to sagittal bending is far too simple,” said senior author Stephanie Pierce, Thomas D Cabot Associate Professor in the Department of Organismic and Evolutionary Biology and curator of vertebrate palaeontology in the Museum of Comparative Zoology at Harvard University.

“Lizards and mammals diverged from one another millions of years ago, and they’ve each gone on their own evolutionary journey,” Pierce added, “We show that living lizards don’t represent any sort of ancestral morphology or function that the two groups would have had in common so long ago.”

“Reptiles have been evolving just as long as mammals and because of that there’s just as much time for changes and specializations to accumulate for reptiles,” Angielczyk said, “If you look at the vertebrae of a modern lizard or crocodile their vertebrae are actually very different from the early ancestors of mammals and reptiles that lived at the same time around 300 million years ago.”

He added that both living mammals and reptiles have accumulated their own set of specialisations over evolutionary time.

Jones and co-authors, including former Harvard graduate student Blake Dickson, began by measuring the shape of the vertebrae of a range of reptiles, mammals, salamanders, and some fossil non-mammalian synapsids.

The specimens came from museum collections all over the world, with modern animal skeletons primarily from the Museum of Comparative Zoology (MCZ), and fossil synapsids from the MCZ, the Field Museum of Natural History, and various other museums in the US, Europe, and South Africa.

“We first had to quantify the shape of the vertebrae and that’s actually a little bit tricky,” said Jones, “Each vertebral column is made up of multiple vertebrae and when you have different numbers of vertebrae their shapes and functions might divide up in different ways.”

They selected five vertebrae at equivalent locations from each of the vertebral columns and measured their shapes across the different animals in three-dimension.

Next, the researchers examined how the vertebrae may have functioned using data from their previous work that compared vertebral shape to degree of vertebral motion in living lizards and mammals. This provided a crucial link between form and function.

The data enabled the researchers to map variation in vertebral function across the broad sample of animals, including the fossils, which allowed them to reconstruct the precise combination of functional traits that described each group of animals.

“Our team’s approach to data analysis is exciting as it can reveal how different backbone shapes may result in different functional trade-offs,” Pierce said.

Reptiles, for example, are very good at lateral bending, but are unable to move their spine up-and-down like mammals.

She added, “In addition to lateral and sagittal bending, we also examined other functions of the backbone and then determined the optimal combination of tradeoffs for mammals, reptiles, and non-mammalian synapsids.”

The research was able to show that non-mammalian synapsids have a different combination of functions in their backbone to both living reptiles and mammals, Jones said.

“In the course of that evolution, they weren’t just traversing from the reptile-like lateral to the mammal-like sagittal bending,” she noted, “They were actually on a completely distinctive path in which they were evolving from a separate condition.”

“The historical expectation is that the synapsid ancestors of mammals were making the same set of trade-offs that modern reptiles do, but it turns out that they have an entirely different set of trade-offs,” Angielczyk said, “The expectation that reptiles would retain ancestral locomotor patterns that existed over 320 million years ago is too simple.”

The results show the backbones of non-mammalian synapsids were actually quite stiff and completely unlike those of lizards which are very compliant in the lateral direction.

Further, during the evolution of mammals, new functions were added to this stiff ancestral foundation, including sagittal bending in the posterior back and twisting up front. The addition of these new functions was pivotal in building the functionally diverse mammalian backbone, allowing modern-day mammals to run really fast and rotate their spine to groom their fur.

“By rigorously analysing the fossil record, we are able to reject the simplistic lateral-to-sagittal hypothesis for a much more complex and interesting evolution story,” Pierce said, “We are now revealing the evolutionary path towards the formation of the unique mammalian backbone.”

The study is part of a series of ongoing projects on the evolution of the mammal backbone, piecing together its development, morphology, function, and evolution.

The researchers are now using three-dimensional modelling of the vertebrae to understand how the ancestors of mammals moved. Jones says that they are now testing their previous studies with CAD assisted three-dimensional models, with preliminary results showing that it is working quite well and appears to support what was found in this paper.