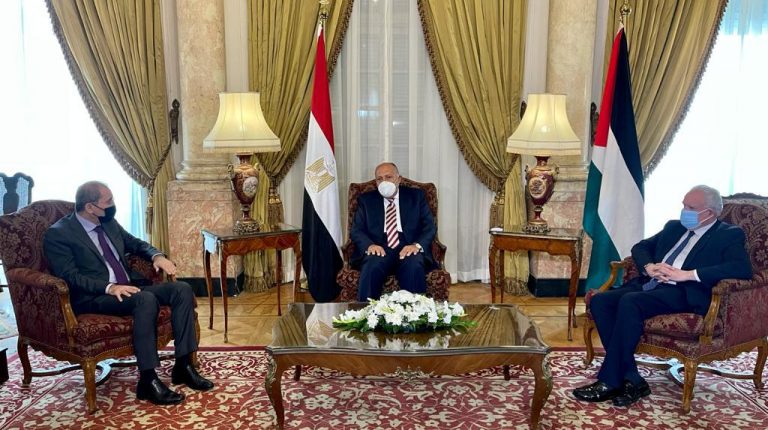 The Ministers of Foreign Affairs to Egypt, Jordan, and Palestine have emphasised that all Israeli settlement activities in the Occupied Palestinian Territories must stop.

It came during a consultative meeting, on Wednesday, at the Ministry of Foreign Affairs in the Egyptian capital, Cairo. The meeting was attended by Egypt’s Minister of Foreign Affairs Sameh Shoukry, his Jordanian counterpart Ayman Safadi, and Palestine’s Riyad Al-Maliki.

According to statements by Ahmed Hafez, Spokesperson for Egypt’s Ministry of Foreign Affairs, the three ministers praised the tangible developments in the areas of cooperation between the three countries.

These have been reflected in the regular holding of trilateral consultation meetings. The ministers also highlighted their sincere desire to advance relations between Egypt, Jordan, and Palestine in various fields.

The ministers stressed that these meetings provide an important platform for coordinating regional and international positions, especially on the Palestinian issue.

They emphasised the importance of building on the momentum that has been built in the past period to move the peace process forward on several tracks.

They also praised the outcomes of the recent meeting held by the Arab League at the ministerial level at its extraordinary session, and the important decisions that came out of it.

The three ministers said they looked forward to the active engagement of the relevant international actors in the peace process in the Middle East.

Hafez said the meeting witnessed agreement on the importance of continued work in the coming period, to create a favourable environment for serious and constructive negotiations between the Palestinian and Israeli parties

These negotiations would end the current stalemate and seek a comprehensive, just, and lasting peace. This would guarantee the establishment of an independent and viable Palestinian state along the borders of June 1967, with east Jerusalem as its capital.

The ministers also stressed the need to stop all Israeli settlement activities in the occupied Palestinian territories, while stressing that settlement operations undermine the chances of reaching a two-state solution, and violate the international legitimacy and international law.

For his part, Shoukry expressed Egypt’s support for all the steps taken by the Palestinian leadership to ensure the success of the dialogue. He also outlined his hope that the upcoming elections will help end Palestinian division.

During the meeting, the ministers agreed to continue coordination and consultation in the coming period in order to achieve common interests and work to revive the peace process in the Middle East.