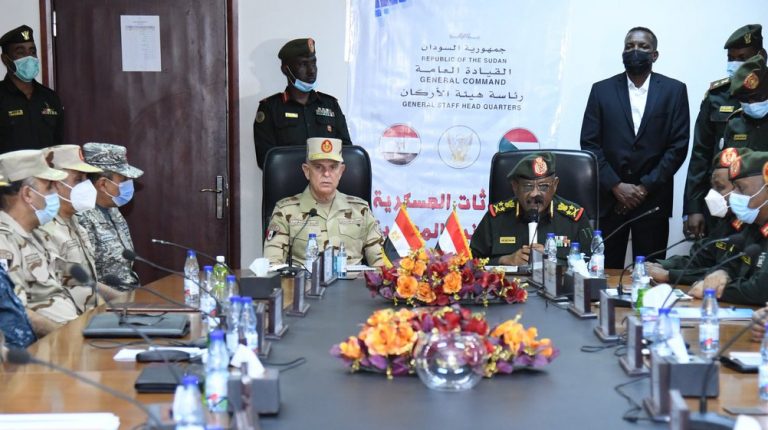 Egypt and Sudan have finalised an agreement to strengthen military cooperation as part of the seventh meeting of the Egyptian-Sudanese Joint Military Committee, which took place in the Sudanese capital, Khartoum, on Tuesday.

Representing the Egyptian side was the country’s Chief-of-Staff of the Armed Forces, General Mohamed Farid.

The Egyptian military said, in a statement on Wednesday, that the joint committee’s meetings were attended by several high-ranking officials, and dealt with a number of issues that support areas of partnership and cooperation between the two countries.

On the sidelines of the joint committee’s talks, Farid met with Abdel Fattah Al-Burhan, Chairperson of the Sovereignty Council of Sudan. Al-Burhan conveyed his greetings to and appreciation of Egyptian President Abdel Fattah Al-Sisi, and lauded the strategic relations between the two countries.

He additionally met with Chief-of-Staff of the Sudanese army Mohamed Osman Al-Hussein, and discussed a number of issues of common interest to the two countries.

These discussions took place with a view to contribute to addressing common challenges. Farid also affirmed that there is a consensus of visions on all issues aimed at developing areas of cooperation between the armed forces of Egypt and Sudan.

The Sudanese army indicated that the agreement sealed during the committee’s meetings is an extension of the framework for military understanding and coordination to strengthen the Egyptian-Sudanese military relations.

The meeting comes as Sudan’s Minister of Foreign Affairs Mariam Al-Sadik announced that the Egyptian President will visit Khartoum next week.

During the high-level visit, it is expected that bilateral relations and ways to develop them will be discussed, as well as common issues of interest, and regional and international issues of common concern. Al-Sisi’s visit to the country is expected to begin next Saturday, according to the Sudanese news agency SUNA.