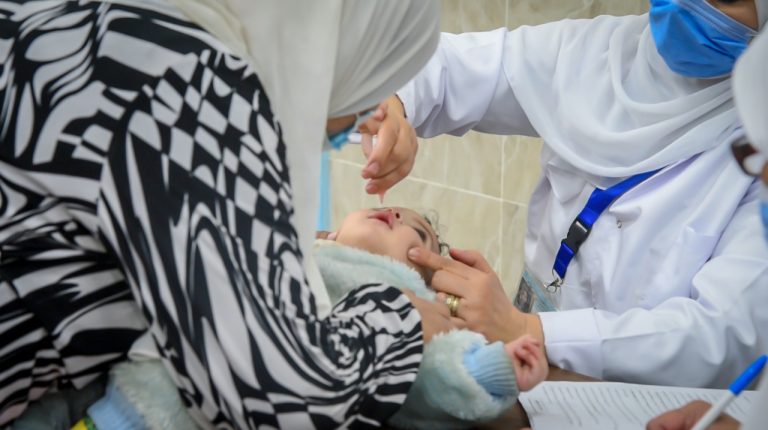 Egypt’s Minister of Health and Population Hala Zayed announced, on Wednesday, that just over 15.627 million children, including 15,704 foreign children residing in Egypt, have received the vaccine against Poliomyelitis, commonly shortened to polio.

The number equals about 93.5% of the total targeted number of 16.7 million children in the campaign. The nationwide campaign includes both Egyptians and non-Egyptians living in the country.

The campaign was launched on Sunday from the Ahalina Medical Center in Cairo’s Salam City, and is set to run from 28 February-3 March 2021. The vaccinations are being provided free of charge for all children from newborns up to five years of age.

In a statement, the Ministry of Health and Population said that the governorates with the highest frequency of citizens in the campaign are: Sharqeya; Cairo; Daqahleya; Menoufiya; Beheira; Qaliubiya; Kafr El-Sheikh; Assiut; and New Valley.

The ministry added that those children eligible will be vaccinated with two consecutive doses of the monovalent vaccination through the implementation of two campaigns.

Vaccination aims to raise community immunity against polio, as a pre-emptive step in conjunction with the outbreak of the disease in a number of neighbouring countries in the Eastern Mediterranean Region.

The vaccination process is done through fixed teams at more than 5,400 health offices and units, and medical centre. This is in addition to mobile teams in major squares, train and subway stations, and next to mosques, churches, clubs, markets, bus and car stops, from eight in the morning until five in the evening.

The last recorded case of poliomyelitis in Egypt was reported in 2004, according to Alaa Eid, the Head of the Preventive Medicine Sector. He added that the ministry is conducting annual vaccination campaigns to ensure raising the immunity of children.

WHO warns of immunisation services suspension amid COVID-19