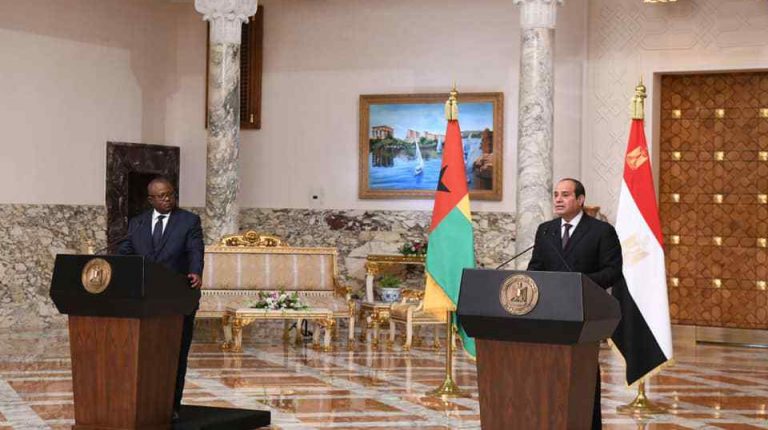 Egypt’s President Abdel Fattah Al-Sisi has held a press conference with his Guinea-Bissau counterpart Umaro Sissoco Embaló, on Thursday, as part of the latter’s official visit to Cairo.

Al-Sisi welcomed Sissoco Embaló, who is making his first visit to Cairo since his election to the presidency.

The Egyptian President pointed out the common historical ties between the two countries dating back to the period of national liberation during the last century.

He added that they also prioritised their discussions on two important issues, namely combating terrorism and the Grand Ethiopian Renaissance Dam (GERD).

Al-Sisi said he briefed Sissoco Embaló on Egypt’s position in the recent negotiations on the massive Ethiopian dam.

He noted his country’s continued keenness to reach a fair and binding agreement to fill and operate the dam, taking into account the desire that no downstream country is harmed by the construction.

During the conference, Sissoco Embaló expressed his sincere appreciation for Egypt’s efforts and asserted his country’s readiness to attract direct Egyptian investments, technical support, and joint security and military coordination.

Before the press conference, the two presidents privately met as part of the latter’s official visit to Cairo.

Sissoco Embaló arrived to Cairo on Thursday, and an official reception ceremony was held during which the Guard of Honour was displayed. During the meeting as part of the presidential visit, the two presidents discussed various issues of common interest.

In a statement, Egyptian Presidency Spokesperson Bassam Rady said that that the meeting witnessed various discussions about the bilateral relations between the two countries.

The two presidents reviewed developments related to efforts to combat terrorism, extremist ideology, and illegal immigration in Africa, as well as the situation in the West African region.

The Egyptian President asserted that Sissoco Embaló ’s visit represents an important opportunity to strengthen relations between the two countries, especially in light of the importance that Guinea-Bissau occupies in West Africa.

Al-Sisi also affirmed Egypt’s readiness to strengthen its development efforts, especially trade exchange, investment, and infrastructure development. This is in addition to receiving Guinean workers to participate in capacity-building and technical support programmes supervised by the Egyptian Agency for Partnership, according to the needs of the Guinean side.