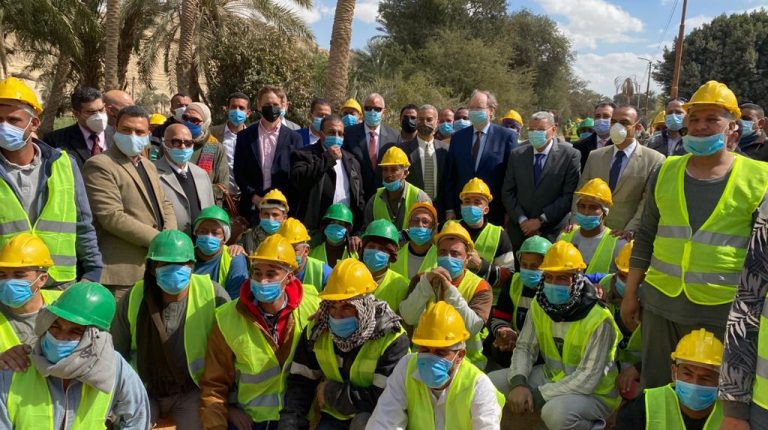 The projects were implemented under the agreement of addressing the root causes of irregular migration funded by the EU.

Nevine Gamea, Minister of Trade and Industry and MSMEDA Executive Director, said the visit falls within the framework of the close cooperation between the agency and the EU, which is a major sponsor of MSMEDA.

“MSMEDA cooperates with a large number of international donor agencies that channel funds to the different projects it implements in the different governorates of Egypt in coordination with the State’s engaged organs,” she added, “This is to fulfil the basic needs of inhabitants of the needy areas to help create an enabling environment for MSMEs.”

Gamea noted that, from July 2014 to the end of December 2020, MSMEDA injected EGP 2.6bn into Minya Governorate. Of this amount, EG P203.2m went to implement infrastructure and community development projects and create 2.730 million daily jobs (man/day).

This came in addition to the EGP 2.4bn that was directed to finance the establishment of 170,000 small- and medium-sized enterprises (SMEs), and which had already generated 201,700 jobs, Gamea added.

“The EU Trust Fund closely cooperates with MSMEDA in providing key services and also small-scale works for community infrastructure, as well as promoting economic activities and enhancing skills needed for employment,” Ambassador Berger said, “This is very much in line with the EU-Egypt partnership priorities.”

He added, “It is a great opportunity to be in Minya today to learn more about this cooperation, and how it is working in practice for the benefit of people living and working here.”

Al-Qadi lauded MSMEDA’s job creation efforts for youth in Minya. He emphasised the continuous cooperation between the agency and the governorate on implementing the projects of the Agreement of Addressing the Root Causes on Irregular Migration.

This would in turn create employment opportunities for casual workers and offer choices to youth in a bid to curb the irregular migration phenomenon.

Meanwhile, Massoud said local contractors in Minya were hired to carry out projects funded by the Agreement. The purpose was to generate daily jobs (man/day) for temporary workers.

He pointed out that these projects visited by the delegation would create more than 13,000 daily job opportunities (man/day) for casual workers during their implementation period.

The Agreement of Addressing the Root Causes of Irregular Migration through Employability and Labour-intensive Works (ELIW) was signed by MSMEDA and the EU at a grant of €27m.

This came according to a study undertaken by the National Coordinating Committee on Preventing Illegal Migration and Combatting and Preventing Trafficking in Persons (NCCPIMC & TIP).

The aim is to give alternatives to youth, qualify them for labour market requirements, and help them establish MSMEs.