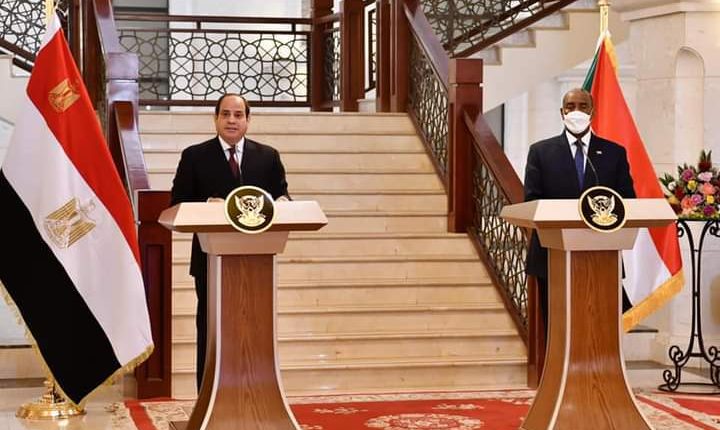 Egypt’s President Abdel Fattah Al-Sisi and head of the Transitional Sovereign Council in Sudan Abdel Fattah Al-Burhan have agreed on the need for intensified efforts regarding the huge Ethiopian dam.

During a bilateral meeting in the Sudanese capital Khartoum, on Saturday, the two highlighted the need to reach a legally binding agreement on filling and operating the huge, but controversial dam.

This meeting between Al-Sisi and Al-Burhan was followed by a plenary session that included the delegations of the two countries.

Both leaders also agreed that the current delicate stage that the Grand Ethiopian Renaissance Dam (GERD) file is experiencing requires the highest degree of coordination between Egypt and Sudan. This is due to their both being the two downstream countries, and directly affected by the dam

They also emphasised their rejection of any unilateral measures aimed at imposing the status quo and monopolising the resources of the Blue Nile.

Meanwhile, they also highlighted the need to strengthen efforts through bilateral, regional, and international agreements to reach a comprehensive and integrated agreement on the rules for filling and operating the Dam. The agreement would have to be legally binding, and achieve the interests of the three countries, namely Egypt, Sudan, and Ethiopia.

Al-Sisi also said that Egypt supports the Sudanese proposal to form an international quartet chaired by the African Union (AU), the US, the European Union (EU), and the United Nations (UN) to mediate the tense negotiations.

The discussions also included ways to strengthen bilateral relations between the two brotherly countries at all levels. This came in addition to discussing a number of regional and international issues of common interest, especially the Sudanese-Ethiopian border dispute and the recent Sudanese moves to extend state sovereignty in its eastern borders.

The move comes as part of Sudan’s respect for international agreements establishing the borders, and its constant endeavour to assert the state’s sovereignty peacefully and without resorting to violence.

Al-Sisi and Al-Burhan additionally discussed various developments in the Horn of Africa and East Africa. The discussions reflected a mutual understanding between the two sides regarding ways to deal with these files, in order to ensure the enhancement of African capabilities to face the challenges facing the continent as a whole.

It was also agreed to intensify the frequency of bilateral meetings between the two sides including senior officials from the two countries periodically. These would see coordination towards the successive developments currently taking place in the geographical surroundings of the two countries.

President Al-Sisi also affirmed Egypt’s continued support for the government and people of Sudan in all fields, and his country’s attention to upgrading bilateral relations.

This would take place in a way that enhances the strategic partnership based on mutual respect and joint cooperation. The bilateral relations would be an example for comprehensive development partnership and economic integration.

Al-Sisi also affirmed Egypt’s support for all efforts to promote peace, stability, and development in Sudan during this pivotal stage in its history. This is based on the firm conviction that Sudan’s security and stability is an integral part of Egypt’s security and stability, and that the latter’s hand is always and forever extended for cooperation, goodness, and construction.

For his part, Al-Burhan said Sudan looks forward to creating joint projects between Egypt and Sudan and to enhance the prospects for cooperation between them at various levels, especially at the political, economic, security and military levels.

During his visit to Khartoum, Al-Sisi also met with Sudanese Prime Minister Abdullah Hamdouk, in which the latter stressed the importance of Egyptian efforts to support stability in Sudan and in the African continent. Later, the Egyptian President held a meeting with Deputy Head of Sudan’s Transitional Sovereign Council, Mohamed Hamdan Daglo (Hamidati).