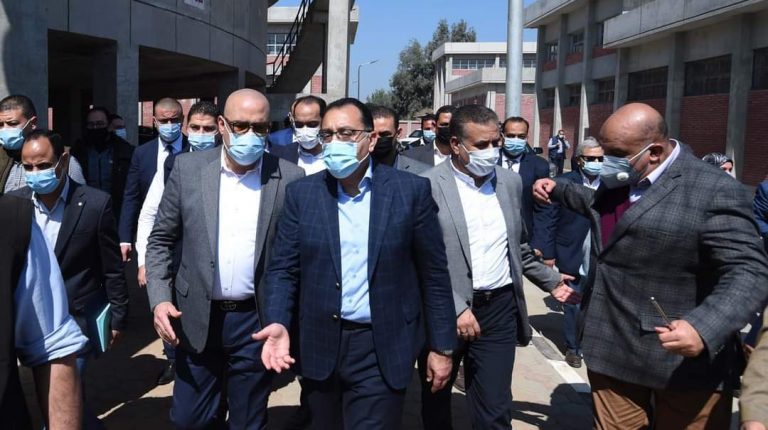 Egypt’s Prime Minister Mostafa Madbouly asserted, on Saturday, the importance of the work that is being carried out to line and rehabilitate canals nationwide.

The national project is being carried out to improve water management and use, increase productivity, expand the agricultural land available across the country, and reduce the waste of the water.

Madbouly had inspected a number of Haya Karima projects in Menoufiya Governorate to follow up on the progress of work on development and service projects. The review included the projects that aim to achieve the national plan for developing Egyptian Villages.

During his tour, Madbouly reviewed the projects to provide clean drinking water and sanitation for the Shama village in Menoufiya Governorate. This includes the work to extend and strengthen drinking water networks for 33 streets, as well as the works to extend the sewage networks of 20 streets.

The project has also allocated an area of 3,500 sqm to establish a school for elementary and primary education for the village’s students, including 29 classrooms,

Meanwhile, work is being done to develop the roads and transportation services in the governorate, in addition to establishing a local unit and offices for civil registry, real estate, supply, and social affairs. This is in addition to an advanced technological centre, and firefighting unit

The projects that will be implemented also include the support and installation of up to 300 telephone lines, as part of Egypt’s digital transformation projects.

The Prime Minister additionally inspected the 8-feddan Al-Bajour drinking water plant, which saw investments of EGP 808m and holds a capacity of 34,000 cbm per day. The station will serve about 500,000 citizens in 48 villages of Menoufiya governorate.

The water lines will be distributed to villages in two phases. The first included eight villages, while the second phase will include the remaining 40 villages, which are scheduled to be completed by the end of 2021.

During his inspection tour of the service and development projects in the governorate, Madbouly inspected the construction works of the Al Hamoul water station, which has seen a total of about EGP 1bn in investments. The station is located on an area of ​​seven acres, and holds a total capacity of 104,000 cbm. Once completed, the station will serve 350,000 people in 31 villages.

Madbouly has also inspected the project of lining the canals in the village of Sobak Al Dahak. He directed for the establishment of a wire fence at the edges of the canals, in order to protect the citizens.

Minister of Water Resources and Irrigation Mohamed Abdel Aaty asserted that his ministry is currently implementing 16 projects, worth a total cost of EGP 281m in Menoufiya Governorate.