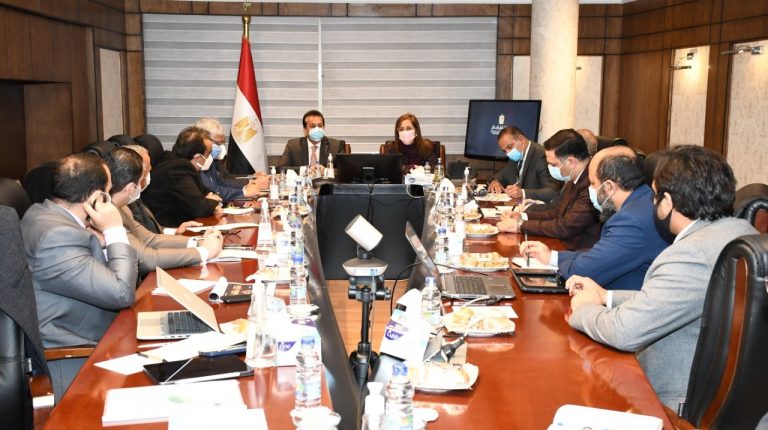 Egypt’s Minister of Planning and Economic Development Hala El-Said has held a series of high-level meetings with five ministers to discuss the country’s proposed investment plan for the next fiscal year (FY) 2021/22.

During the meeting, Abdel Aaty outlined his ministry’s proposal for the investment plan during FY 2021/22, where the executive position of the national project for the rehabilitation of canals was presented.

He also reviewed the position of the national project to complete the infrastructure for the development of North Sinai, with the lands planned to be cultivated in North and Central Sinai. This is depending on the water produced from the Bahr Al-Baqar Drainage Water Treatment Plant.

The meeting also saw a review of the projects that have been targeted for implementation during the next fiscal year, such as: protection works from torrential dangers; drilling and equipping underground wells; projects to develop and protect the Nile River; and establish, support, and rehabilitate major facilities on waterways.

This is in addition to projects to develop and rationalise irrigation systems for 1 million feddans, a project to establish and replace 50 lift stations nationwide, as well as a project to complete and develop the buildings and laboratories of the National Center for Water Research.

At the same time, this will see the completion of applied studies in the field of water resources, and projects to protect Egypt’s coastline.

During El-Said’s meeting with Shawky, the two ministers discussed the Ministry of Education and Technical Education’s targets for the proposed investment appropriations for FY 2021/22.

This came in addition to the ministry’s initiatives regarding electronic lessons, ensuring the availability of electronic screens in the preparatory stage, smart spaces, and distance education platforms. Also part of the review was the reformulation of a database for students compatible with databases in other authorities.

The meeting also touched on the Ministry of Education’s targeted achievements in terms of developing education by modernising the infrastructure of public secondary education schools, and improving the quality of the research and technology system.

This will take place by developing technology for the different stages of education in Egypt, as well as the joint Egyptian-Japanese schools in stimulating the educational process.

During the meeting between El-Said and Abdel Ghaffar, the importance of the scientific research sector was emphasised as the main guarantor for achieving comprehensive and sustainable economic development within the framework of Egypt’s Vision 2030.

The meeting also focused on the importance of supporting technological universities as a new path to education that contributes to reducing the unemployment rate. They also seek to open up labour markets to graduates of these universities, in addition to achieving development in the new urban areas in which the establishment of new universities is being expanded.

The Egyptian countryside development project and the Decent Life initiative were at the forefront of the topics discussed during the meeting between El-Said and Minister of Housing, Utilities, and Urban Communities Assem El Gazzar.

During the meeting, the importance of housing projects being compatible with the state’s plan was emphasised, whether in delivering sanitation service to citizens or providing adequate housing.

It also sought to emphasise the importance of the national project to develop the Egyptian countryside, considering the Ministry of Housing, Utilities, and Urban Communities as one of the main partners in this.

El-Said also met with Minister of Transport Kamel El Wazir to discuss the ministry’s investment plan for the next FY 2021/22. During the meeting, the ministers discussed a number of the latter ministry’s projects, such as the express train project, the monorail and road expansions, such as the expansion of the ring road and the river transport sectors.

The meeting also touched on national projects for roads and bridges, subway lines, railways, and other services provided by the sector to citizens. This will ensure that a transport system is provided that achieves Egypt’s sustainable development goals (SDGs), and supports the role of transport at the regional and international levels.